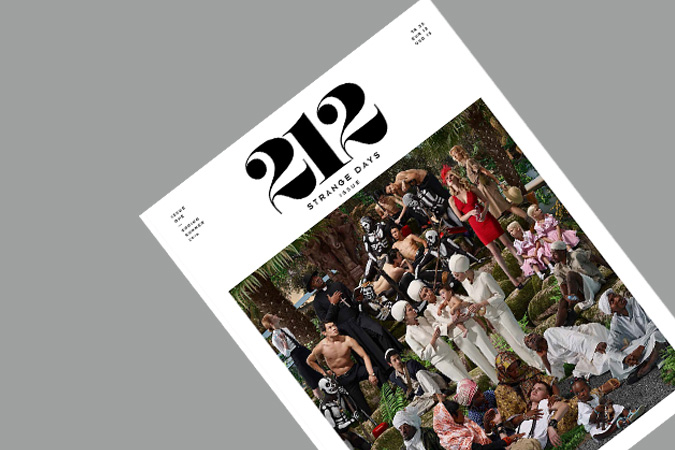 With 186 large format pages, 212 is towering in both its physical dimensions as well as setting stage to an ambitious publication that one should definitely watch out for. With a fresh editorial design, 212 magazine is a (read successful) attempt to bring the local aspects of Turkey to the international forefront while bridging the gap between what’s ordinarily portrayed of the East and what more remains to be discovered. The name itself comes from the area code for Istanbul and coincidentally, that of New York as well – ‘a piece of misdirection that’s characteristic of the magazine’s ethos’.

Opening the issue is a manifesto by writer Dan Comstock, a stunning piece of writing that justifies the issue’s title ‘Strange Days’ with impeccable observations on the modern way of living. ‘Stranger than Fiction’ by film director Cem Kaya is a revelatory piece that looks into copyright laws and the thriving times of Turkish Cinema. ‘Primal at Heart’ by Charles Freger is a curious photographic piece that may require two viewing to fully grasp as it explores ritualistic images in flamboyant colours. Elsewhere, you find work of photographer George Georgiou, taken from his book ‘Fault Lines’, focusing on the signs of change in the everyday lives of people in Turkish villages. ‘A Journey out of Orbit’ follows Muhammed Ahmed Faris from being the only Syrian cosmonaut to a refugee. Further into the issue, long form interviews with British documentary filmmaker Adam Curtis and artist-actress Kembra Pfahler capture fascinating outlooks on journalism and feminism respectively. Fiction appears thrice – ‘The Power of Spring’ by Orhan Veli, ‘EN.’ by Hikmet Hukumenoglu and ‘The Road to Alpullu’ by Aysegul – all immersive in Turkish sentiments and perhaps would scream nostalgia for the Pamuk lovers. Fashion too has its devoted pages in 212 with Recep Cesur’s stellar collection and a photoshoot at Buzludzha in Bulgaria, a monument that carries too much history under its weight.

With its beastly size, 212 commands a specific kind of attention. Well into its opening features itself, it becomes clear that this almost defiant curation is more than just a bound book – it’s an archive of modern times.