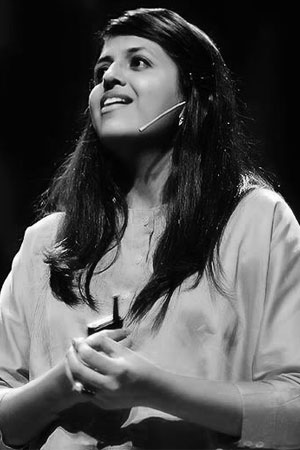 White Print, a Braille lifestyle magazine in India, has only one full time employee – Upasana Makati– who also happens to be its owner, publisher and editor. In the last two years of its being, White Print has had a lot of content contributions from freelancers and now has a freshly struck agreement with Delhi Press’ The Caravan magazine, well-known for its long form journalism. However, there have been times when Upasana has had to write the whole issue herself. On a muggy September morning, we catch up with Upasana over coffee to get a lowdown on the process of putting together an indie magazine, especially a magazine that has had no specific reference point, being the first of its kind in India.

White Print’s cycle begins on the 2nd or 3rd of every month. This is when Upasana (in picture above taken at Tedx Gateway Women talk 2015) puts together a tentative list of stories for the forthcoming issue, keeping a few extra as backup. She consults with her freelancers about what they intend to write. “I don’t follow a particular theme for any issue. There is no specific content guideline as such either. It’s pretty flexible and I want to keep it this way,” she says. The only thing she keeps in mind is that no story should be “too heavy” as her readership ranges from an 11 year old to an 80 year old.

Catering to this wide spectrum certainly has its challenges, but the magazine has managed to work around it well. “We try and pick up stories that are lighthearted and that almost everyone will enjoy. While children have a lot of easy reads in the magazine, I also want them to read about politics. They need to know what’s happening.” White Print is conscious about not having any content on sex, murder, rape, etc. that can have a negative implication for its youngest readers.

The monthly magazine, launched in May 2013, consists of 64 pages on an average. In terms of content, it carries short stories (by writer Sudha Murthy), travelogues, quizzes, and pieces on technology (as and when there is something related to its target audience), music and fashion. The magazine also carries inspirational stories that catch Upasana’s eye. It doubles up as a platform for its readers to showcase their talent in the form of Readers’ Submissions. And most recently, it has added a job listings section.

Interestingly, many sections in the magazine have been started post readers’ feedback. Bollywood section, for example, started after White Print published a piece on 100 years of cinema. This was well applauded by the readers, and they demanded for more. Another reader pointed out that there are not too many recipe books available in Braille. “After that, I approached many notable chefs to suggest recipes that wouldn’t require too much gas usage, and are quick and healthy,” says Upasana.

The Caravan tie-up came after the magazine did a story on White Print. Soon after the story was published, the editorial head called Upasana up and offered a collaboration wherein she could choose any story from their forthcoming issue and publish it in White Print. Barkha Dutt has been providing a political column for the magazine regularly, whose rights she took from the Hindustan Times.

Coming back to the cycle, by the 15th of every month, the writers are supposed to turn in the content. Post that, Upasana dons her editor’s avatar to look into the content and to polish it up as and when required. Anytime between 20th and 22nd, she takes the compiled content to the National Association for the Blind (NAB) at Worli, which has been commissioned to print (at Braille Press) and deliver the magazine ever since its launch.

At NAB, the publishing process kickstarts with Upasana arranging the content (each section on a new page) and converting the text into Braille by using a software called Duxbury. After that the magazine is proofread by one of the proofreaders at NAB itself. “There are chances that when you convert the text to Braille, there are some extra dots that could change the meaning of a word altogether,” she says.

The printing of 300 copies, the magazine’s current print run, is wrapped up usually by 25th or 26th of every month. After this, Upasana handovers the labels with her subscribers’ names and addresses to the NAB guys, who then take care of the packing and dispatching the magazine (through Indian Post).

Finally, by the 9th or 10th of the next month, the magazine copies find their way to the subscribers’ homes in different parts of the country. “Sometimes, it can take a while though. Like one of my readers in Darjeeling gets the magazine quite late. Her cycle is almost 20th of every month,” says Upasana. Sometimes, unexpected delays happen too. Last month, the printing press at NAB broke down and they had to wait for a machine part that was coming all the way from Norway. She does get anxious calls from subscribers if the magazine is late, but they don’t really complain.

NAB has been guiding White Print ever since the beginning. “When I started out there, was nothing connecting me to the world of visually impaired, but NAB really helped me out. They have been a very strong support.” Another learning from NAB has been to not give the magazine for free. They advised Upasana that she needs to charge a minimal subscription fee or people wouldn’t take the magazine seriously. As a result, the magazine’s yearly subscription is a nominal amount - INR 300.

White Print is a commercial venture, something that Upasana has specified time and again. Her main source of income is through advertising. As with almost all indie publications, financing the magazine and attracting advertisers hasn’t been a cakewalk for White Print. “Initially it was very hard for me to convince people to advertise as this is a fairly new concept. Even though a brand like Raymond came onboard for the first issue, there have been times when we didn’t have advertisers for 6-8 months,” she says.

Even then, the magazine has managed a very impressive, albeit small, roster of a-list advertisers including Raymond, Coca Cola, Tata, Aircel and Vodafone. And all these associations have happened via emails to the senior most executives in the respective companies, reveals Upasana. In case of the Tata group, for example, she had to directly write to Ratan Tata after being unsuccessful in hearing from others within the group she had written to earlier. Ratan Tata got someone from his team to contact Upasana under a week’s time. “This has been another major learning for me. Getting in touch with the topmost authority has almost always worked.”

Of course, getting extensive media coverage and backings of some of the best known brands of the country has definitely eased the process of approaching the advertisers a bit. However, White Print still gets caught up in a lot of advertising related rigmaroles. “There are still brands who don’t want to associate with us as we are not an NGO, and therefore they can’t include us in their CSR activities. Many brands are also still unsure or unaware of what we do. I remember I had gone to meet this lady from a big MNC and she didn’t know what Braille was.”

Most brands that have come on board have allocated a part of their marketing budget to advertise in the magazine, which Upasana feels is the right way to go. White Print is currently also experimenting with different models for revenue. A recent source of revenue is corporate subscriptions. In this model, a corporate company can sponsor a particular number of subscriptions at a little above the production cost (INR 2500 per year).

Upasana is also very keen on getting the government involved with the magazine through either advertising, subscriptions or grants. “It’s not worked out so far but I am constantly following up. I have been even writing messages to Prime Minister Narendra Modi on his website. Let’s see if he replies,” she says. Considering Upasana’s perseverance and her great track record, we think it’s only a matter of time.