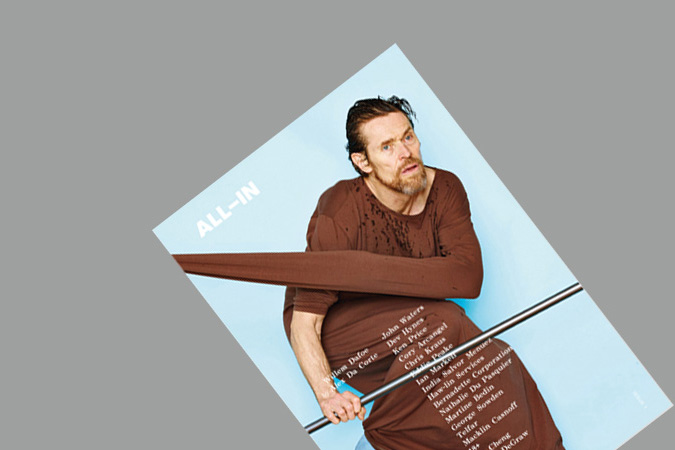 This truncated beginning of Charles Dickens’ 'A Tale of Two Cities' applies to the world of indie magazines right now. This is indeed the best of times to be a discerning reader, thanks to the ever expanding vibrant and talented community of indie magazines. Indie magazines are dropping on us like little wrapped gifts from the heaven, and we are being constantly serenaded with great content and great design.

Why is it the worst of times then? Well, that’s more like a first world problem. Now that there is this wild abundance of good magazines to read, we just don’t know what to pick and what to leave.

In this scenario, when a new indie magazine – ALL-IN arrives at our doorstep from New York, the question is whether to pick it or leave it? ALL-IN is a biannual arts and culture print publication which promises to bring “emerging and established artists together to collaborate, acting as a platform for new visual material.” The subjects covered are art, food, design and other media. It is founded by Allison Littrell and Benjamin Barron.

The cover is way too enticing and it is hard not to open. The first issue of this (almost book-sized) magazine has actor William Dafoe on the cover in some loose brown oversized garment and sky blue shoes. The cover also communicates that some of the other people I’ll find in the magazine include John Waters, Chris Kraus, Dev Hynes, members of the legendary Italian design collective called The Memphis Group, Cory Arcangel, among many others.

Once opened, it takes very little time to realise that the magazine has been styled very well. The pages are stunning, with even advertisements neatly merging into the magazine’s design sensibilities. Eventually this isn’t a surprise as we find out that many of the ads were created exclusively for the magazine.

In terms of content, the features are laid out well. Conversations, like the one with the filmmaker, actor, writer and visual artist John Waters or with the artist Cory Arcangel, are quite short but meaningful. Then there is this very intense, very interesting conversation with American writer Chris Kraus who, among other things, talks about her writing inspiration, process and realism. “In my writing, and in my work as a co-editor of Semiotext(e)…, I am very interested in all works of art that reveal things as they are. A lot of most heavy writing and art tends to obscure, rather than reveal.”

Another interesting interview is with artist/sculptor Eddie Peak where Peak talks about his move from London to Rome, and how that’s affected his work. He also talks about his growing up days and about the ambiguous narratives in his work. Even if you are unfamiliar with his work, the interview gives you a pretty good insight into his work. Coupled with some absolutely wonderful and colorful photographs clicked by Alex Da Corte, the cover man William Dafoe’s interview by Benjamin Barron’s mother Jeannette Montgomery Barron was also quite fun to read.

The Memphis Group, which started in 1980, had postmodernist designer Ettore Sottsass bring together a collective of designers in Milan. "Drawing inspiration from sources as diverse as Art Deco, Kitsch, Pop Art and Futurism, Memphis shook the established tradition of Modern Design to its core." The interviews with a few members of the now defunct Memphis group – Nathalie Du Pasquier, Martine Bedin and George Sowden– evoke nostalgia on one hand, and emphasize on Memphis' influences in today's design world.

So now that I have given you a sneak peek, let me conclude on whether it was actually worth picking up the magazine. The answer is a big yes, of course. The inaugural issue of ALL-IN is quite radical. It questions the norm by featuring people who are avant-garde in their own way, something we truly appreciate.