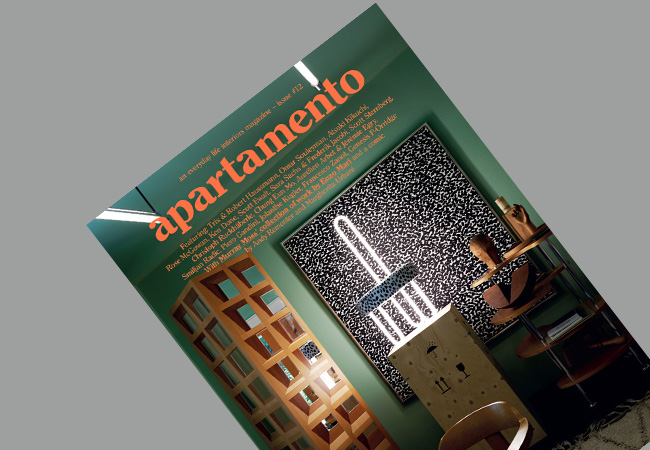 “An everyday life interiors magazine” is how biannual magazine Apartamento modestly describes itself. This humility trickles down from the description on the cover into each and every page of this divine magazine. Apartamento, with simplicity and unpretentiousness (a word often used for this magazine), takes us inside the homes of many creative folks from all over the world.

“A real living space is made from living, not decorating. A bored materialist can’t understand that a house has to become a home. It happens, not through perfection but by participation," the founders say in their introductory note about the magazine. Apartamento was started in April 2008 in Barcelona by Nacho Alegre (creative director) and Omar Sosa (art director). The current editor in chief is Marco Velardi.

Let’s take a look inside one of the issues now- #12. The issue kicks off with a series of vignettes in an easy B&W layout, which are mostly personal stories by people in context to their relationship with different kinds of spaces. From this series, I loved ‘Acartamento’ by Jonathan Olivares the most, where he talks about his life inside his car, especially in the context of a place like LA, where your car is a “constant companion, and one that you become emotionally attached to and socially associated with.” Jonathan subtly provides interesting insights into an unusual space, but a space with which he has a subconscious relationship with (like many of us do with our cars!).

The piece on Syrian musician Omar Souleyman is poignant at so many levels. Omar talks to writer Alia Farid about his temporary rented house in Turkey, while constantly nostalgically referring to his real home – Syria – that he and his family had to leave because of the political turmoil. The interview is also interspersed with references to many established and upcoming musicians from that part of the world. (I am getting a new playlist!)

Japanese graphic designer Atsuki Kikuchi’s living situation instantly throws light on his work, as he mentions that his best work happens in the mornings so he often sleeps in the office. And this is how he meets the deadlines at the very last minute. “If my deadline was yesterday I can send the work in during the gap before everyone else starts working.” The conversation traverses through Atsuki’s career as a graphic designer, some of his works (many of which is spread over his house and office), the prominent themes in his work and contemporary Japanese art and design.

So as you can see, the magazine gives us these in-depth stories about creative people through the space they inhabit. Any home or studio that is covered in this magazine is through the role it plays in the dweller’s life. Interestingly, in some cases, the house or studio doubles up as a portfolio of a creative person. Artist Scott Ewalt’s obsession and passion with Burlesque (and its memorabilia) has turned his apartment into a museum of sorts. Again, through the story of the house, we are led into a larger and fascinating story not only about the history of Burlesque in New York, but also about this particular house. The original owner of the house died due to spontaneous meningitis within eight hours of moving into the house. The house’s walls, before it was renovated, were stuffed with human hair, thanks to a wig factory located on the top floor. And get this, the place was also rumored to have a ‘Suicide’ bar which made a cocktail that contained benzene, cocaine and rum.

This is just the tip of the iceberg. And before I get too excited and start laying out all the stories here as my favorites, let me wrap this up!

The winner of the Yellow Pencil at the prestigious D&A Awards in 2010, Apartamento is worth every penny and every moment one would spend on it. The biannual is thankfully thick (250+ pages) with a huge number and variety of stories. Most importantly, the magazine lives upto its founders’ idea of “home”. Unlike many interior design magazines that only lay out titillating stories about the dolled up flesh of a house, Apartamento directly takes us to the soul that makes a house a home.