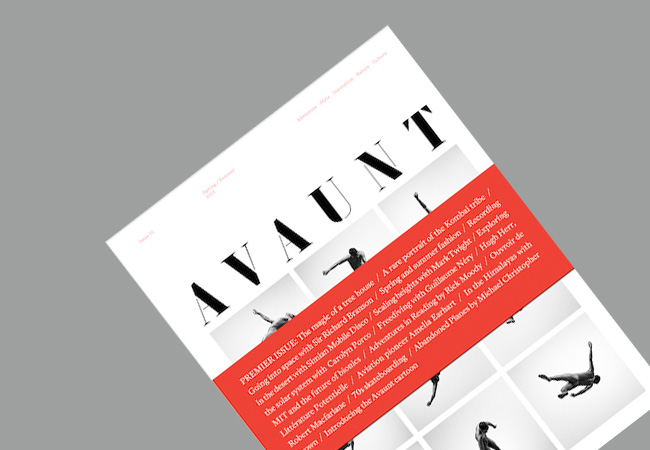 A lot has already been written and said about Avaunt, a brand new magazine which released its very first issue (Spring/Summer 2015) not too long ago. We couldn’t wait to get our hands on the issue.

For starters, this magazine has two big things going for it – the team and its subject. Publishers of PORT (a modern guide to men’s lifestyle – shared with our subscribers as part of our April’15 dispatch) Dan Crowe and Matt Willy, team up with Ben Saunders, a Polar explorer, to bring this title which is dedicated to adventure.

PORT’s success and the role that Dan Crowe played in that success is no secret and therefore one can be rest assured that this new print will exhibit the sensibility expected of an international magazine and there is no doubt that the contributors gathered for each issue would all be at the top of their game.

Second and perhaps more importantly, what instantly sets this title apart is its fresh theme of ‘adventure’ or as the team likes to explain, ‘adventure, in the broadest possible sense’. Sure, there is adventure in sports and travel but the magazine is not restricting itself to just that; it also aims to capture adventures in technology, music, science and culture.

Style is not alien to adventure, the editorial in the issue makes a compelling observation – “After all, the Earl of Carnarvon cracked open Tutankhamun’s tomb wearing a Norton & Sons’ suit; George Mallory died on Everest in a tailored tweed Norfolk jacket; Amelia Earheart launched her own clothing line in the 1930s (‘For the woman who lives actively’) and Reinhold Messner and Peter Habeler climbed Everest without oxygen for the first time in natty Fila down suits.” With this belief, the magazine intends to also showcase the great style, which is part of any adventure.

In this first issue, alongside profiles of the first man to sail the world solo (Sir Robin Knox-Johnston), Wilfred Thesigar crossing the Arabian Empty Quarter, the world’s largest land sea, on camel and foot, there are recollections of adventures ‘in audio’ by James Ford (producer and part of the duo, Simian Mobile Disco) as they head to record their latest album to the California desert, and by the former literary editor of the Observer, Robert McCrum, about his struggles coping with the aftermath of a stroke that left him partially paralysed.

Avaunt in its wider sense means ‘to move forward’ and thus the magazine offers portrayals of the pioneers, the extraordinary men and women who rose to the challenge and were the first to move forward. Amongst them was Amelia Earhart, a woman who tragically vanished while piloting a record-breaking flight around the globe. Hugh Herr, a climbing enthusiast who earned the moniker ‘Mechanical Boy’ took upon himself to revolutionize the field of prostheses after a tragic accident that resulted in amputation of his legs below the knee.

Also in the issue, American novelist Rick Moody expresses dismay at the nonchalant approach to reading by many, who consider it devoid of real adventure. Nothing could be farther from the truth, he insists and challenges people to read a book.

The magazine checks all boxes as far as content is concerned, and of course it looks gorgeous with its bold type and glossy paper. We are sure to include this bi-annual title in our roster of magazines that we send to our subscribers.

Endnote - The magazine is hosting an event ‘Avaunt Live’, a one-evening celebration of adventure in October later this year, at London’s Royal Geographical Society and Royal Institution, a chance to meet the incredible people in this issue. So if you are in London around that time, we reckon this would make a stellar attraction... one not to be missed. Do keep us posted if you go – we would love to be a part of this event, albeit vicariously…Instagram perhaps?