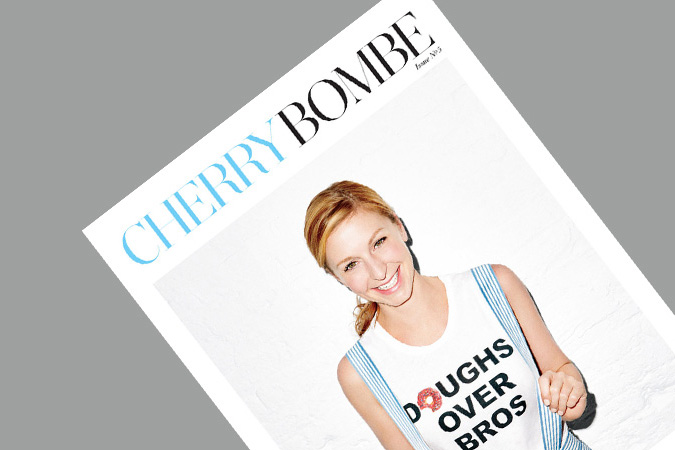 I don’t know the last time I used the word ‘cute’ to describe a magazine but I most definitely will use it for Cherry Bombe, a bi-annual culinary magazine. The world of Cherry Bombe is immensely cute, and full of intelligent, fun and creative women that I instantly want to be great friends with and have many soirées with over all things delicious. The magazine is full of stories about these women’s passions and ideas, all neatly bundled up with the thread of food.

The magazine was launched by Kerry Diamond (editorial director) and Claudia Wu (creative director) in 2013. The two founders, who had met each other while working at Harper’s Bazaar in 2001, managed to raise $42,000 on Kickstarter to launch their first issue to many rave reviews. According to this piece on NYT, Cherry Bombe takes its name from the Escoffier-sanctioned bombe which is a “dome traditionally moulded from two or more flavours of ice cream — in this instance, cherry with a core of chocolate. But it’s also a wink at the cherry bomb firecracker and a salute to the 1976 punk classic “Cherry Bomb” by the all-girl band the Runaways...”

The spirit of Cherry Bombe is splendidly reflected in the charming cover of its latest issue themed on Pet Project. The strikingly clean cover features the delightful Christina Tosi, often referred to as a pastry goddess, with a dress that says ‘Doughs over Bros’. Well said, ladies!

Inside, most of the smaller pieces have a neat write-up on the left and a scrumptious full page photo on the right. The matte-finish pages are a delight to look at, hold and feel.

I was pleasantly surprised to find Gillian Jacobs, aka Britta Perry from Community (she is in Lena Dunham’s Girls as well, but I haven’t seen that), whose further claim to fame is her interest in gastronomy. ‘Mixed Nuts’ littered fascinating food trivia from around the world on two pages. Here’s a sample: A glass of beer is how American Novelist Carson McCullers began her day. This was followed by Sherry, hot tea and martinis spread through the day, with beer at night again.

The fabulous feature (and idea) of freezing tedious healthy juices into exciting popsicles was a great read. ‘Pussies Galore’ talks about NYC’s first cat café Meow Parlour by Christina Ha and Emilie Legrand. In case you are wondering, it is exactly what it sounds like. It’s a place for cats and cats’ owners to chill and eat. And if you are a dog person, then you must read ‘Haute Oats’, story of Dailola Granola venture by Teresa Misagel, the name and flavours of which are inspired by her two dogs named Dialo and Lola.

Elsewhere, artist and chef Lexie Smith talks about working with food all the while taking care of her “stormy stomach”. Migraine Diary by Grace Gold is a deeply personal story on how documenting the uncomfortable times when she suffered from migraines helped her get a sense of foods that were triggering the menacing headaches. The story is brilliantly supplemented with recipes that can help anyone dealing with migraines.

Okay, coming to my most favorite part now. Sofia Alveraz’s lessons, with illustrations by Joana Avillez, on how to bake a wedding cake had me in splits and how. “Join some sort of group (a playwrights group works well for this). Each week, when you are supposed to bring in 10 pages of a new play, bring in a cake instead. Ask the group to discuss the cake as they would your play.”

To be honest, I didn’t even need so much good stuff because, Cherry Bombe, you had me at ‘Doughs over Bros’.