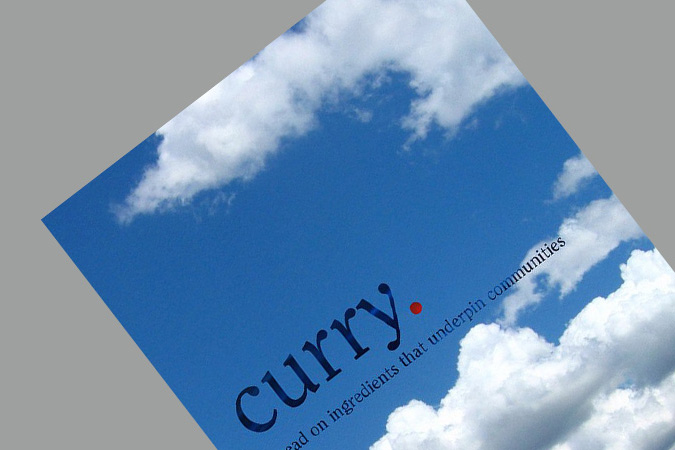 Magazine folks, may we urge you to turn your attention to the East, a new magazine is on the rise in the horizon. Curry is a brand new print magazine based out of Kolkata for a global audience.

A mélange of contemporary and traditional India, Curry, in a finite set of 10 bi-annual print issues, seeks to cover relevant topics affecting the human life - whether socio-cultural, economic, political or sartorial choices and their consequences.

‘Opening minds is opening borders’is the philosophy of Shreya Dalmia, who set out on this dynamic venture as an undergraduate student of Creative Direction for Fashion (under the school of media and communication) at the London College of Fashion. While in London, encounters with faculty and peers from various backgrounds as well as past experiences garnered during workshops with publishing houses, and spending time amongst museums and libraries, equipped the young creative, with the much required inspiration and drive to give rise to this project. What began as a graduation project, celebrated the launch of its very first issue dedicated to ‘Taste’, not too long ago.

“When it was first conceptualized, it had the British Asian and European audiences in mind, but after having moved base to India, the first issue is directed to more of an Indian contemporary reader introducing sometimes bizarre (intrasexual), sometimes urgent (dying butterflies in the Kulu valley), sometimes alien (unemployement in Barcelona) and sometimes refreshingly relatable concepts (gender ambivalence; potbellies), usually through small standfirsts and visual spreads”

Shreya tells us. What has also played a predominant role in the creation of the first issue is the nuanced culture of Calcutta. Amidst the remnants of colonial history, the bazaars and the effervescent love for literature, here is where Shreya found true potential for an audience that is both engaged and engaging. “The city has been extremely supportive and charged up about the idea of a 'print' publication. Calcutta is a city that reads and has always epitomized print, whether newspapers at coffee houses or dusted second hands in the stores of College Street” she says.

From comfort food to religious diversity to interracial one-night stands, the first issue of the magazine explores a plethora of still-nascent tangents of the current Indian society, churning out fresh, creative and bold content for the curious minds. Apart from work by Shreya herself, the magazine features a pool of creative Indian as well as international talent from the field of photography, art and writing such as Arka Patra, Nicole Ngai, Lia Surely and Ramanuj Ghosh amongst several others, ultimately bringing to the forefront, a dynamic array of ideas and perspectives.

Future plans for this creative venture, we understand, include simultaneous launch of zines to accompany the magazine as well as print and theme oriented products, providing readers and enthusiasts with the spirit of Curry in thoughtfully curated takeaways. Shreya hopes for this venture to become a platform to exhibit thought leadership and constructive exchange of transnational ideas - with a focus on India and its ever-growing counter-cultures - to ultimately open doors to sthe tasteful way of life. With a clever take on ideas that break through the clutter of age-old societal constructs, this magazine is all set to dive into a sea of idiosyncrasies from all around the globe and we eagerly look forward to what more the title has to share in the future.