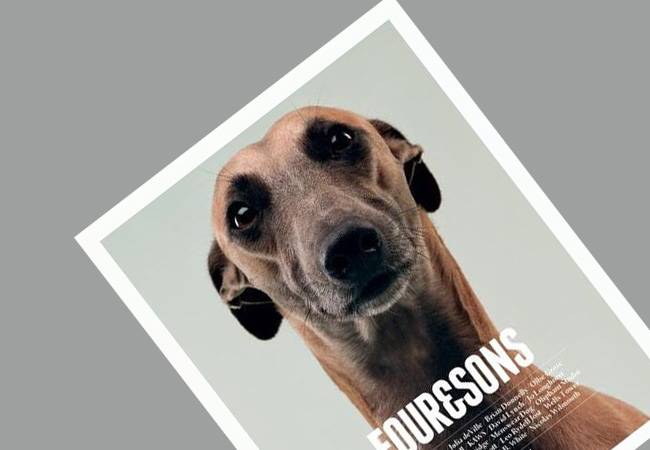 While the magazine title by itself is unlikely to reveal the plot, the “Woof Woof” on the envelope summoning you to tear it open, and the featuring cover stars of the magazine – are rather big hints of what lies within.

This strappy young publication which is only three issues old, is shining the spot light on our canine friends and highlighting the role of the ever-inspiring ‘muse’ they play in our lives. Four&Sons chronicles the work of interesting people from different walks of life (music to literature) and their interesting dogs (glaborous Chihuahuas to moody English Bulldogs).

As you can imagine, this is one print you are likely to instantly connect with if you’ve ever had a dog as your best bud. Just watch them grab the lime light, striking that perfect pose for a scintillating cover or showing off their groovy strides as they accompany their relatively giant two-legged friends - looking considerably more desirable.

Four&Sons is an Australian biannual independent publication at the helm of which is Marta Roca, Publisher and Creative Director/ Editor of the magazine; and Nadia Saccardo the Editor-at-Large, who some of us may know as the co-founder of Smith Journal, another successful indie magazine title from Down Under. The striking list of contributors to the magazine from across the world, most of whom unabashedly prefer dogs to humans, do a marvellous job of covering the features and writing tales centred around the wide-eyed subject.

The magazine recently released its third issue, which follows creatives across different fields so as to learn about the influence their mutts (generically speaking) have had on them and their work.

The issue starts off with a feature by Martin Usborn, introducing his journey of tracing the abysmal fall from grace of Spanish hunting dogs (Galgo or Spanish Greyhounds) and the gruesome treatment that is meted out to them, once abandoned (for being too old or not good enough) by our race. Usborn’s work of chasing the journey of the breed from historical heaven to modern day hell is now captured in a successfully Kickstarer funded photography book Where Hunting Dogs Rests. Also featured is an interview with another acclaimed photographer and self-confessed ‘Dog Whisperer’, Mary Ellen Mark about her advocacy of analogue photography and her photobook Man and Beast published last year, that explores the bond between humans and animals in two seemingly different cultures – Mexico and India.

In an interview, artist Geoff McFetridge who has had an illustrious career sketching designs for brands including Nike, creating animation for The New York Times and who was also responsible for designing visual elements for Spike Jone’s Her – introduces his two rescues, Sweetie & Foxy and chats about what keeps him away from sketching dogs. We read about dachshund-friendly architecture (ingenious!), an essay by Wells Towers relaying a hilarious account of falling in love with a Chihuahua and much more.

Talking about the role dogs have played in our careers, the issue meets a legendary Tokyo groomer Shigetomo Egashira and his staff of 11 humans and 10 dogs running a dog grooming salon, DogMan in Tokyo.

The magazine successfully delivers on its aim of showcasing man’s best friends in the role of a muse and is likely to gently tug at the hearts of even those who have deprived themselves of experiencing the power of this friendship and bond, thus far.