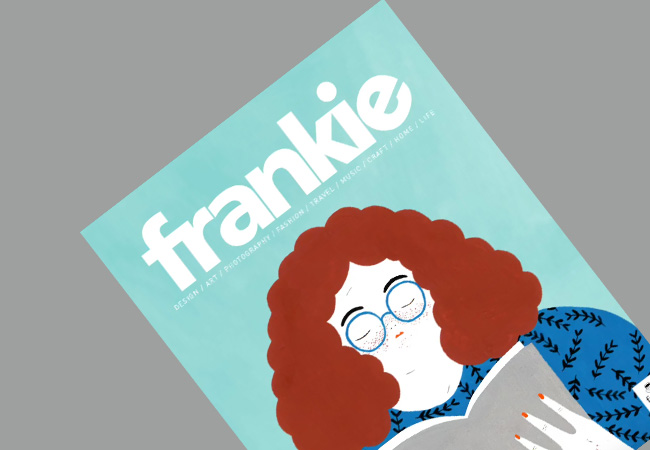 frankie is a bi-monthly women’s magazine published out of Australia by frankie press (an imprint of Morrison Media), who also publish men’s magazine Smith Journal. frankie was launched in 2004 by Louise Bannister and Lara Burke, and is currently edited by Jo Walker. The founders wanted to launch a magazine “that spoke directly to the reader, contained great affordable fashion, sweet art, interesting reads, real people and pretty photography.”

Below is a letter I wrote to frankie, after reading their 65th issue.

The first time I opened issue 65, the assortment of things from different offline and online spaces on the first few pages would have me fooled that you are just another women’s magazine. I had heard many good things about you and I was on the verge of being disappointed. Thankfully, before even going any further, you held me back on those pages with charming little interviews in boxes weaved in-between.

In your 65th issue, the features on the designers who make artistic prosthetic covers for lower limb amputees and the “history detectives” duo who uncover old family treasures and dirty secrets were both quite interesting. So was the extensive feature on four local creatives who are keeping some of the oldest forms of art alive in Australia, including a rocking horse maker, stonemason, umbrella maker and cooper.

Thanks for enlightening me about the fact that Moonwalk originated in 1932, and wasn’t really invented by Michael Jackson, in the highly intriguing piece - ‘The unexpected stories behind some of your favorite dance moves’. The story about the vintage dress collector Joulie Poulter tracking down the woman who lent her name to the 1950s designer dress brand ‘Lilli Diamond’ was strangely gratifying. (Lilli Diamond is the late designer Al Diamond’s wife and muse). And man, those divine dresses!

Another standout piece for me was ‘Deathly Professions’ where an embalmer, a funeral director’s assistant and a forensic odontologist earnestly decode their professions, their alternate lives, and also quip about how people (like me) get weirdly fascinated by them.

Oh, and the DIY stuff would definitely come in handy, especially the one about creating first aid kits through basic household items like chamomile tea bags and credit cards! Nifty stuff.

Overall, the subjects you choose are quite offbeat, which is obviously great. And while I am a huge fan of long form interviews, I have to admit that your morsel versions with a variety of artists, designers and musicians were such pleasant and easy reads.

I like your texture. Both your layouts and writing on those lovely matte pages are clean and simple. To be completely honest, I didn’t even feel like I was reading a “women’s magazine”. All the content can be gleefully consumed by any gender.

frankie, you were a fun ride that I thoroughly enjoyed over a lazy afternoon.