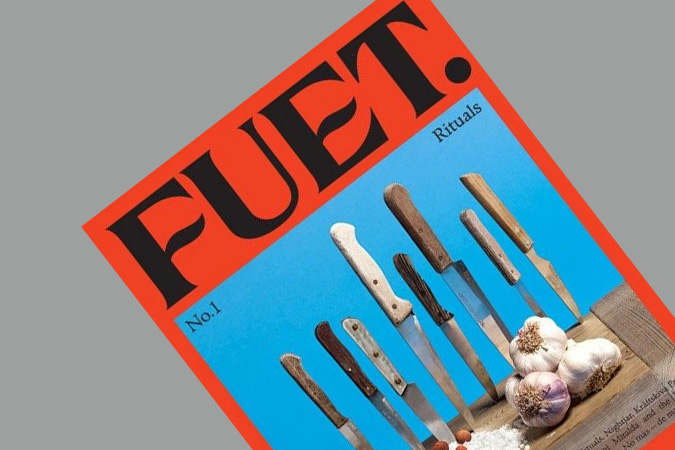 Food has the got the better of me – it is evident with the indiscriminate number of food related articles that are bookmarked on my computer on a daily basis, journals bought even if there is a shadow of food on the cover and of course now its making for a rather ‘large’ part of my appearance too. So when it came to choosing the next magazine to be introduced to our readers, I hungrily grabbed the copy of FUET issue 1 that I had purchased last year when travelling.

FUET is only two issues old. This young magazine about food and its peripheries is published out of Barcelona. “If we can, with our recipes, words and images, inspire a great meal and maybe a smile, then we are satisfied” – the team introduces the magazine on its website.

The first issue of FUET Magazine, was aimed at writing about food and the culture surrounding it. With ‘Rituals’ as the theme of the issue, the team explored both modern as well as seemingly archaic gastronomic rituals forming part of culture. On the cover of the issue are 8 knives over four wood blocks with salt and garlic, an interpretation of rituals on food by Córdova Canillas.

The issue begins the journey on a slightly magical note, a love potion recipe in the feature titled ‘Cooking, magic and witchcraft’. I may have been tempted to try the recipes that form part of the article, if I could somehow manage to get hare testicles and dove’s liver in Mumbai (currently finding beef is priority) and of course had I not been already married.

FUET is a thin, Catalan, dry cured, sausage of pork meat. In spite of its very meaty orientation, the magazine is not dogmatic in its views. Vegetarians are welcome to share their thoughts. A strong case in point, Maria Arranz (also one half of the editorial team), a vegetarian by choice, follows her family during ‘matanza’ (sacrificing ritual celebrated during the winter months in Spain) with an attempt at making people more aware of where the food that we buy so neatly packaged and displayed in the market, is produced. Maria hopes to share a glimpse of raw reality which she believes will do everyone a bit of good, at least once in a lifetime – perhaps even help become conscious of the cruelty of the slaughter of an animal.

The second issue, explores the playful side of food. Starting with its very cover, which features Mr. Potato head. Talking about icons and the relationship they have had with food throughout history, the second issue received a great response as well. The issue covers works of pop art and explores Martí Guixé’s vision of food as another object of design; television’s most famous chefs and travel to the disturbing town of Twin Peaks to discover its gastronomic mysteries, as well as a very special menu, developed by London studio Bompas & Parr.

A small format magazine, its design is uncomplicated and text driven. While there is not a lot of white space, the magazine’s content is uncluttered, adding to a great reading experience.

Its easy to grab the attention for a food magazine, food lends itself to great photographs which makes exciting covers and photo essays. But the real challenge for any food magazine is a sustained readership – which only content can guarantee. I was happy to find FUET standing equally tall to the challenge, in its second issue.