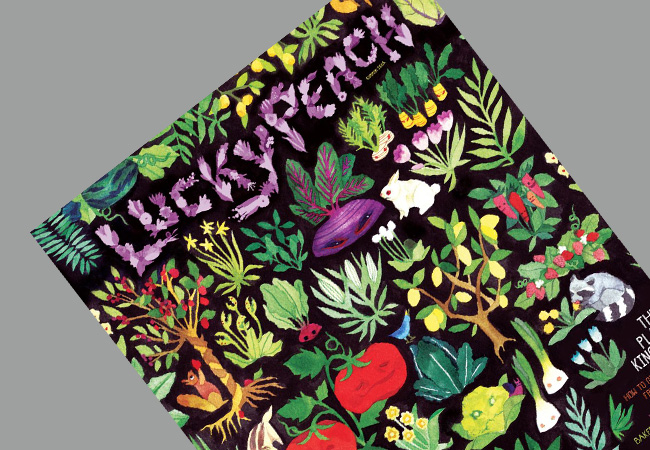 Lucky Peach, a food quarterly, probably doesn’t need another review to say just how great it is. It is very aware of its own brilliance, and has been universally acclaimed since it was first launched in 2011 by David Chang, celebrity chef from New York, in collaboration with McSweeney’s. It amicably parted ways with McSweeney’s in 2013 though, and is now published independently. The magazine recently launched a fantastic online version as well.

Like I said, the magazine doesn’t really need another review so here are simply some observations I had about Lucky Peach, specifically about their Summer 2105 issue:

First things first, Lucky Peach should rightly term itself as a quarterly on food, writing and art, instead of just ‘food and writing’. Art is one of the main protagonists of the magazine. The front cover of Summer 2015, The Plant Kingdom issue, is gorgeously illustrated by Stacey Rozich, and the back cover is a photograph by Maren Caruso. The typeface ‘LP Popular’ is specifically designed for this issue by Benjamin Critton. Many of the stories are wonderfully illustrated by different artists. One of my favorite parts of this issue is a 10-page ethereal comic story titled ‘Planting’ by artist Lisa Hanawalt which is broadly based on the idea of home gardening.

Lucky Peach spreads its tentacles far and wide, and in wholly new directions, when it comes to food. Like how great journalism should be, it gives you information and gripping perspectives from a lot of different angles. Each issue is theme based, where the theme is explored to the world’s end. Some of the themes covered so far include Fantasy, Obsession, Seashore, Street Food, Gender, Travel and China Town, among others.

The Plant Kingdom issue not only takes you to many geographical locations including Japan, India, New York, California, New Mexico and Mars, it also delves deep into the various manifestations of food – in anthropology, history, religion, and science. Michael Snyder’s Penance Food is an exhaustive exploration of how religion and (limitations on) food co-exist in Jainism. The story is sprawled across many pages and takes a genuinely curious approach to the many food principles that Jains are supposed to follow, one of which includes simply consuming rather than savoring the food.

Blood Sugar is the most compelling piece I have ever read on the very bloody history of refined sugar, its nefarious role in the origins of slavery, and how it still sustains slavery, forced labor and child labor in many parts of the world. Of course, I had always been aware of all the health repercussions and somehow found them easy to ignore. But with the information about the gory history and the humungous negative effect that it is currently causing on the environment and on the lives of millions of people, the article truly stunned me. I just had a large cup of coffee without any sugar, something which I never ever do.

The piece on the performance art of Alison Knowles that involves making- get this - salad had me pretty entertained though. So did the charming profiles of people who grow oversized vegetables, mainly to enter into local competitions. The Plant Kingdom has many other interesting stories including a piece on the “Queen of Greens” Deborah Madison who has published 11 books on the subject including the very famous ‘Vegetarian Cooking for Everyone’. The recipe piece that strikes the most in this issue is vegetable inspired ice-cream recipes. Fancy some Caramelized Onion Ice Cream with Raisin Caramel?

Lucky Peach can be breezy and gritty at the same time. It will delight you, but it will also shock you in places. It will let you read itself at leisure, but on occasions, it will strictly demand your attention, and probably want to be carried along for a few (or many) days. Great journalism, as I said!