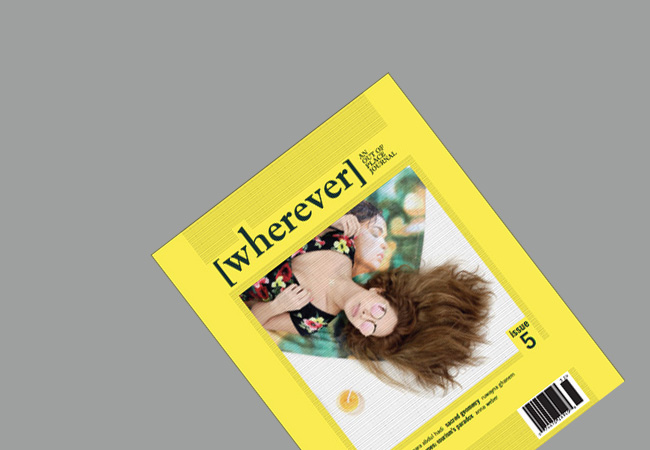 “A person susceptible to “wanderlust” is not so much addicted to movement as committed to transformation.”

This wonderful thought by the acclaimed travel writer Pico Iyer is the essence of [wherever], a bi-annual travel magazine from New York.

Travel (and travel writing) indeed is really not just about movement anymore. More and more people are breaking the manacles of popular travel guides, experiencing travel at a much deeper level, and leveraging it to transform their lives. These travelers are no longer satiated with the obvious beauty of a place. They want to experience and read stories about a place which are hidden, unusual and even dark sometimes.

Enter [wherever]. A travel magazine, after my own heart.

Now in its fifth issue (technically sixth, as it started with a zero issue), [wherever] was launched in 2013 by Rawan Hadid. Divided into three broad categories - travel culture, travel literature and travel politics – the magazine assembles “writing and artwork that are germane to movement, connections, transitions, and the general transience of the people, places, and things of the world.”

Let’s take a sneak peek into its latest issue that kicks off with some lovely rumination by the magazine’s creative director, Ruwayna Ghanem, on the geometric figure of circle. The piece titled ‘Smultronställe’, which means a wild strawberry patch or a treasured little corner, is a poignant poetic prose by Aleksandra Hogendorf about her life in New York City.

The issue also takes you to the ongoing artistic renaissance that is happening in Morocco, especially Marrakesh, which is giving its local artisans a fresh lease of life.

In another reportage piece, the writer weaves in the “gifts” that the Nepali migrants who have moved to Malaysia bring back to their hometown, into the larger landscape of their complicated lives and the economy of Nepal. A fascinating read. Themes of migration and identity are explored in another story where the writer with Eastern European roots tries to find the remnants of his old life in the new land (Dublin) he is now based in.

‘A short walk in a light drizzle’ made me grin, as writer Sazy Koldys narrates her hilarious encounter with two porters in Cambridge, UK when she tells them about her wish for a day trip to a nearby beach. Chaos follows, thanks to the British habit of exaggerating the time it takes to travel a particular distance.

Most importantly though, this issue remarkably talks about the idea of how being a traveler is actually not so easy and the temptation to be a tourist is always lurking around the corner. We are surrounded with must-to-dos about any city, which are good in their way but not at all a holistic way to travel a place. A traveler needs to find a way to individualize his or her travels. ‘Sightseeing & Stereotypes: Tourism’s Paradox’ takes us to the heart of this intricate matter, via Paris and Rome. In a black & white illustrated travelogue, cartoonist and illustrator Sarah Glidden amusingly talks about unsuccessfully trying out the garb of a “tourist” to explore the charming Florence city.

[wherever] is a travel magazine that cracks open the surface that is simply scratched by majority of travel writing, and lets the reader submerge fully. To sum up, I would only say that [wherever] seems fully committed to transformation.