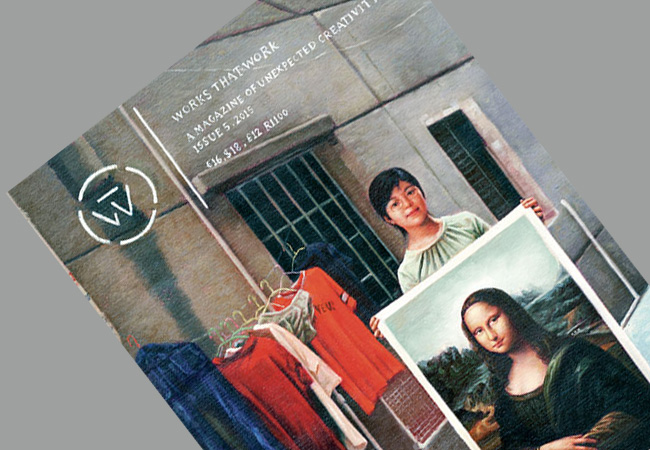 To describe Works that Work magazine (WTW) as a mere design title unfairly masks the real span of its content and underestimates the reach of the title. This magazine has a much larger ambit catering to a wider audience outside the circle of design aficionados. WTW is a magazine about creativity and ingenuity that we, as the human race, are capable of and often exhibit, in our daily lives to suit our circumstances. Its about how, why and what people create.

Starting out with a successfully crowd-funded campaign for a design periodical that was targeted at the public at large, the first issue of WTW was released in early 2013. With each of its 5 issues released till date, the magazine has demonstrated that design is not the exclusive domain of designers and artists and has shared awe-inspiring and heartwarming stories of unexpected creativity from across the globe.

For each issue, the team scouts for stories of creativity centered on a theme. In the two most recent issues, 4 and 5, the magazine focused on creativity borne out of extreme climate and creativity on the edge of legality (and beyond), respectively, covering stories of human perseverance giving rise to skilled endeavours.

The latest issue 5 goes looking for stories of imaginative inventions that tread on rather risky grounds facing the challenge of the law and some that may even be perceived as ethically suspect.

A toy anti-government protest, clandestine horticulture operations, the global mecca of fake papers in Philippines, a village in China dubbed as the world’s copy cat capital (Dafen Oil Painting Village), spurts of ingenuity even from behind bars of a maximum-security state prison – the issue is replete with stories that will amaze, inspire and affirm your belief in the adage that ‘possibility is limited only by ones imagination’.

In fact, in line with the theme of the current issue 5, i.e. exploring creativity on the edges of legality, the team of WTW commissioned Chinese art workers in the village of Dafen to paint a reproduction of the photo by Michael Wolf. Michael Wolf is a German photographer who photographed Dafen art workers for his project Real Fake Art. WTW is auctioning off this original oil painting, which depicts a Chinese artist holding her reproduction of the Mona Lisa (read full story on WTW website).

Apart from showcasing ingenuity, the WTW also deserves credit for initiating an ingenious measure to tackle hurdles to distribution by adopting a ‘social distribution’ model. With an aim to reinvent publication distribution and eliminate middlemen, the magazine decided to partner directly with readers to get its magazine distributed. The magazine encourages its readers to distribute the magazine to the bookstores in their city by buying copies of the magazines from any of the WTW hubs at half the price and sell it for no more than the cover price to friends, colleagues, friends etc.

A self-published magazine re-examining the publishing model and trying to create an ad-free periodical, WTW is based out of Amsterdam and published four times a year. At the helm of the magazine is Peter Biľak, the founding editor of WTW. He also runs Typotheque type foundry and co-founded Dot Dot Dot magazine. We hope to connect with Pete Biľak to hear about his magazine adventures and plans for the upcoming issues of the magazine, soon.

Photo credit: The image of the original oil painting from the latest cover of Works That Work from WTW website.