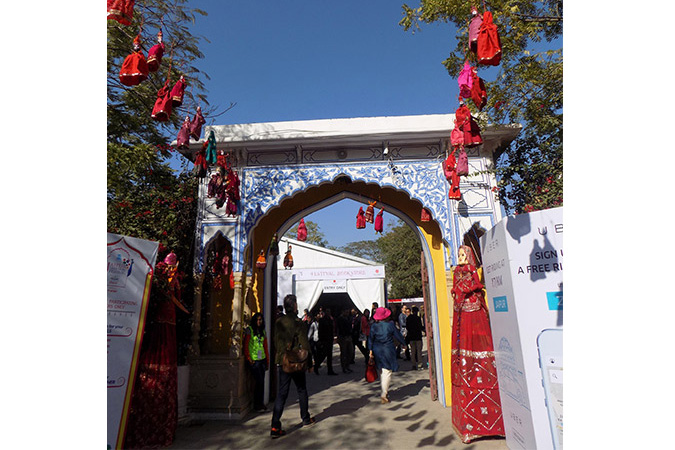 “I am of the generation where there were a lot of dots.”

One of the most eagerly awaited sessions of the five day extravaganza that Jaipur Literature Festival 2016 is, was scheduled for this morning. The session was with none other than Margaret Atwood about her new book ‘The Heart Goes Last’. The absolutely charming chemistry between Atwood and Naomi Alderman (author and Atwood’s mentee) had the large audience, happily crammed in the expansive Rajnigandha Silver Pearls Front Lawn at Diggi Palace, asking for more.

Atwood was brilliantly funny and insightful, of course. With the news about her upcoming eclectic works (that also includes a graphic novel and an adaptation of Shakespeare’s Tempest), she took the audiences to dizzying heights of admiration. I must add here that Alderman was a superb host who knew how to treat the audience to all the knowledge and wit that Atwood could possibly impart in a one hour session. Together they spoke about Zombies, dragons, Canada, the “cool” new Canadian president, Donald Trump in an Indian newspaper, lingerie, dystopia, utopia, Shakespeare, and about dots which basically means giving the readers a scope to implement their wild imagination.

Post this, while my colleagues Nupur and Pratika stayed in the Lawn for a session titled ‘Selfie’ with Stephen Fry and Christina Lamb, among others, I found my way to the cozy Baithak. Baithak was hosting a conversation between William Dalrymple and his “childhood hero” the legendary war photographer Don McCullin. The conversation was inspirational, to say the least. It was so humbling to hear McCullin, who has covered some of the biggest wars in the world, talk. “If I didn’t bring my emotion into the imagery, I would have failed at my job,” he said.

The talk was robustly supplemented by some of the most well known and iconic war photographs by McCullin taken in different parts of the world including Vietnam, Cambodia and Berlin. He believes that the biggest challenge of his job was to make sure that he didn’t glamorize war, as it was easy to do so. And despite of all the risks and challenges, what motivated him to go on was the sheer love for photography. He is married to photography, he said. What did he gain out of all this, someone in the audiences asked him. “It’s turned me into a nicer human being,” he replied.

Post this session, Nupur and I headed to the wonderful Teatro Dhora where Paper Planes is co-hosting a pretty exciting event that’s happening tomorrow evening. You must come if you are around. All the details are here.

And after a delicious and languid meal at Spice Court in Civil Lines, I headed back to the venue to catch one last session on something very close to my and Paper Planes’ heart- Longform. The session had a superb line up of longform proponents and writers that included Alex Shoumatoff, Raghu Karnad, Atul Gawande, Marie Brenner and Jonathan Shainin (who moderated the event). They all have done absolutely fantastic longform writing for different publications including New Yorker, Vanity Fair and Caravan, among others.

The session had some pretty good insights on longform journalism and its importance in today’s context. Most speakers emphasized on the fact that what makes longform unique is its ability to make stories emotionally resonant. “In longform, you get to penetrate into the emotions and psychological states of the subjects/characters; something which short-form or daily news never allows,” said Marie. Raghu also spoke about how longform needs resources. Even Caravan, which has revived the longform writing in India, has the backing of a publishing house like Delhi Press which produces a lot of other “mass magazines”, he pointed out.

A good end to a good day. We are busy preparing for our event at Teatro Dhora tomorrow, but not before we indulge in some magnificent evening lights and vibes of Jaipur markets.