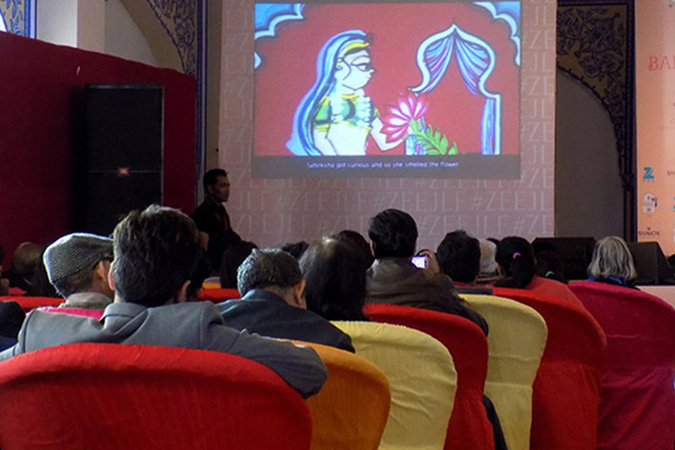 There are many things that unite us as people, but literature does that in a very unique way. A book might present the same story to all its readers, but it is imagined and evoked in mind by each reader distinctively, and that’s what makes literature so wonderfully inimitable.

Today was the fourth day of Jaipur Literature Festival 2016, and our last day at the festival. Cracking JLF on a Sunday requires wading through some very tough waters, but it was completely worth it for the three sessions that I got to attend.

James, while addressing the audience, emphasised how many Shakespeare scholars often have a very romanticized view of the writer/dramatist. The early years of the 17th century was the time, James said, when Shakespeare was struggling to find his voice. His works in those times were not at the same level as Hamlet or Macbeth.

As Margareta explained, James’ book is about Shakespeare’s work process. He debunks the myth of Shakespeare being a forever fertile genius. He also brought about an important insight in the conversation about how Shakespeare doesn’t like making up stories. He works on the stories that already exist. King Lear, in this context, was taken from an old play called ‘History of King Lear’ and Shakespeare did a “gut renovation” of the play and gifted it its universally famous tragic ending. James is also not the one to delve into Shakespeare’s personal life. “My Shakespeare never had time for sex. He was always writing.”

The next was a session with the extraordinary travel writer Colin Thubron who graciously invited Peter Frankopan to talk extensively about his book ‘The Silk Roads’. Peter, after recording the cheering of the massive audience for his children, went on to describe the ideas behind his highly ambitious book which focuses on the Eastern world and how it will shape the next century.

The last session I attended at the sprawling Char Bagh was unsurprisingly crowded. It was a panel discussion on ‘Outside In, Inside Out: Decoding India’s Visual Culture’ consisting of Steve McCurry, Vidya Dahejia, Aman Nath, William Dalrymple and Alka Pande. The crux of the discussion was about how we have an abundance of visual arts and culture in India that we often neglect or take for granted. McCurry, at the very beginning of the session, acknowledged that there was an inexhaustible source of inspiration within India and that one does not need to ever go anywhere else in search of it. There are just so many visual symbols that represent India so beautifully, but sadly they are often ignored. Aman Nath considers 'Ellora' a far more important visual symbol for India than Taj Mahal. William Dalrymple who is an active researcher of ancient Indian art, including miniature art form, spoke passionately about the need to realise the importance of what we have around us in terms of visual arts, and how absolutely unique it is in different parts of the country.

With that discussion, we decided to wrap up our tryst with JLF 2016. There is something almost spiritual and transcendental about being surrounded with so many great minds in one single venue. I feel truly invigorated and enlightened and I am sure Nupur and Pratika, who have all along been part of JLF with me, share the sentiments.

PS: You may wish to watch this brilliant documentary on Don McCullin by BBC. It was highly recommended by William Dalrymple. To read about McCullin’s session at JLF, you can read our blog here.