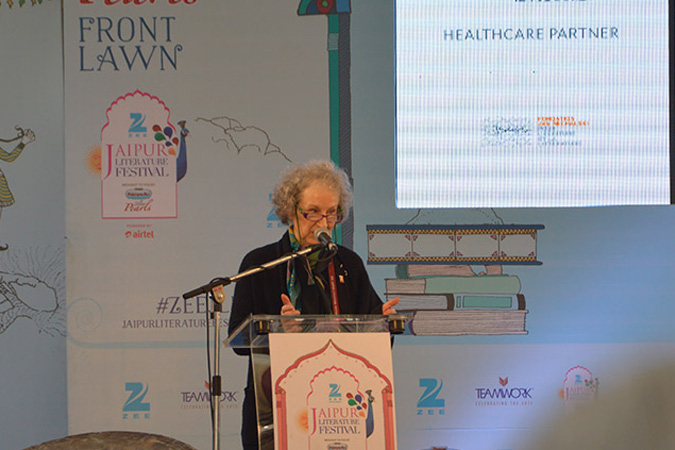 As print lovers at Paper Planes, we’re all about the printed word. The world’s largest free festival officially announced a record number of visitors i.e. 245,000 during the five days of the festival in 2015. This year the number is expected to be far greater, if anything.

It’s our first time here, so “excited” would be putting it very blandly.

We're eager to see what the publishing world is up to at the Jaipur Literature Festival 2016, meet our printophile friends and of course, there’s a party. We’ve put together a little something to unwind after the well-spent day at the literary carnival.

“Yo bro, Is Ruskin Bond coming today?” The Ajmer Shatabdi train from Delhi to Jaipur kickstarted my Zee Jaipur Literature Festival (JLF) 2016 expedition. The introductory sentence is one of the many that I effortlessly eavesdropped on, in my train’s coach, more than half of which was filled with the eager visitors of JLF. I soon directed my ears towards a conversation about Ghalib by an old woman who emphasized on how his poetry is unbelievably relevant to contemporary times. Another conversation that sweetly wafted towards me was about Manto and Chughtai. I was completely at home.

At the venue, my colleagues Nupur Joshi-Thanks and Pratika Yashaswi served as Margaret Atwood’s - who gave the keynote speech - and Colm Tóibín’s esteemed audiences. Nupur came out immensely mesmerized by Colm. “The childlike excitement and passion” about his work is what inspired her the most.

I finally caught up with both of them for the Molly Crabapple’s session in an intimate and charming hall at Diggi Palace, the festival’s venue. Our very own William Dalrymple asked artist-journalist Molly about her work, and all the far flung places where her work has bravely taken her so far like Iraq, Gaza, Syria, Guantanamo Bay, among others. Molly, as you probably know by now, is a regular columnist with VICE magazine, and she contributes both her writings and art to various other publications as well.

I actually got introduced to her through this absolutely fantastic interview that my eternal favorite indie magazine The Great Discontent did with her. Since then, I have read a lot of her writing, seen a lot of her art, and have very actively stalked her on social media. So it was a great pleasure to finally hear her talk, especially about subjects close to her heart. Molly is currently collaborating with a writer from Iraq who has been sending her cellphone images which she then translates into drawings. For an upcoming show in New York City, she is making portraits for her female friends and asking them to take over the portraits and write or basically do whatever they want on them. “The best thing you can do as an artist is to give control to your subjects,” she says.

While we had some pretty average food for lunch, we more than made up for it by gorging on the absolutely relishing set of massive installations ‘Tall Tales’ that visual artist Orijit Sen has conceptualized and created, along with his People Tree’s team. There is Leo Tolstoy’s Anna Karenina, George Orwell’s Animal Farm and Anthony Burgess’ A Clockwork Orange (see cover image to this blog), among others. All the installations have been created using bamboo, wire, paper, fabric, recycled materials and found objects. We love!

Writer, poet and journalist Nirupama Dutt’s session with Bant Singh (part of Bhasha series by Dainik Bhaskar newspaper) is something I am so glad that I bumped into. Dutt has written a book called ‘The Ballad of Bant Singh’ based on the life of Bant, a Dalit agrarian labourer and activist in Punjab’s Jhabar village. You can read more about the book here. The poignant and moving talk about the making of the book was beautifully peppered with Bant’s soulful singing.

I finally wrapped up the day with a session on ‘Kaavad: The itinerant storytellers of Rajasthan’, which was an amalgamation of talk by Nina Sabnani who is an extensive researcher of Kaavad, screening of a small animated movie she created on the Rajasthani art form and live performances by two Kaavad artists.

That’s a wrap. Tomorrow has a pretty good line-up. Margaret Atwood’s session is at 10 am. But for now, we are heading for some sundowners on our lovely and humble haveli turned hotel’s gardens.

PS: If you are in Jaipur and want to catch up with us, hit us on any of our social media channels. And do come by our event on 23rd January. All details here.