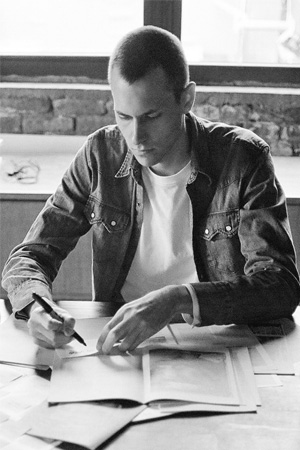 Love is a dance of contradictions - its sensuous yet fickle, its comforting but often unforgiving, it affords confidence which could easily debase into neediness. Passion on the other hand is simpler to grasp – an unyielding desire, madness really. Here is a magazine brimming with stories of love and passion for both work and being, which is likely to resonate with each one of us who has loved and/or passionately followed their heart.

Surely Hello Mr. is a magazine chronicling stories from a gay man’s perspective, but its audience is universal. In an attempt to reinvent the unimaginative and clichéd content that many gay magazines end up churning out – Hello Mr. sets a new standard.

Ryan Fitzgibbon is the founder and editor-in-chief of Hello Mr., who set out to follow his passion and launched Hello Mr. in early 2013; building a community of men who date men starting new conversations about their interests, loves, hopes, and fears. We learnt more about the magazine and Fitzgibbon’s journey from the man himself. Read on.

How would you introduce Hello Mr. to people new to the magazine?

More than a magazine, Hello Mr. is a community of men who date men striving to rebrand their image through new conversations about their interests, values, and aspirations. Published twice a year, each issue reflects the universal stories of gay men today.

Is the content targeted only at a gay audience or is there a larger audience in mind when commissioning stories and features for the magazine?

The magazine is about men who date men, not for men who date men. Each issue should evoke a range of emotions that appeals to a wider audience than just a gay demographic. I hope that people who read Hello Mr. feel like they’ve discovered something that reflects exactly how they’re feeling, even it they weren’t expecting it at face value. So when a woman in her forties decides to pick up Hello Mr. while wandering around a bookstore, she could relate to the range of emotions too. A reader named, Daniel Lawson explained, “It feels like a manual for gay and straight people. It's reflective, relatable, but most of all, it's human.”

Are there any magazines catering to gay lifestyle out there that inspired you to tread on similar lines or is it the dearth of inspiration that in a way led to the advent of Hello Mr.?

There are a number of gay magazines, which I look up to for the purpose they served in leading the way, but Hello Mr. was born out of a need for something new. Gay men are portrayed in a handful of ways across media outlets, but it tends to be the clichés that seem to make their way to the image below the headline. The symbols and icons most commonly used are universal and quickly understood; so it’s most commonly just a lack of creative originality, in my opinion.

When you started the magazine was there a bigger purpose in mind other than doing a well-designed magazine for the gay community?

I launched Hello Mr. boldly claiming it as my attempt at “rebranding gay media.” Though, I wasn’t just talking about the visuals. The luxury of depth in the personal narratives of this generation of gay males was long overdue. Hello Mr. is an opportunity to step away from the stereotypes in the spotlight and spend a little time reflecting and defining our own unique experiences. The community that formed around this common goal was the original intention for this magazine.

How do you measure the success of what you set out to achieve with this magazine, apart from the obvious i.e. increased sales?

We've had great press, including a feature in New York Magazine as one of the 'New Generation of Indie Magazines,' but our greatest and most genuine accolades come straight from our readers, in the form of Instagram posts, comments, Tweets, and even fan mail. A number of our readers (men and women, gay and straight) told us that they had never purchased a gay magazine prior to Hello Mr., describing us as “unexpected” and “a breath of fresh air.” It's truly overwhelming to receive the gratitude of thousands of readers who deeply believe in Hello Mr. This kind of impact is immeasurable, but motivates me to keep going.

You are not just the founder but also the editor-in-chief of the magazine – what part of this dual role, do you enjoy the most?

The interactions I get to have with the people who help create it. The community is the binding that makes this magazine happen, and I created Hello Mr. to inspire people and change perceptions about a gay experience. A younger version of me used to frequent the periodical section of booksellers looking for a sense of community so I could understand what it meant to be gay. Now I get to inspire the Ryan Fitzgibbons to come, and to work with like-minded amazing people. That’s the best part.

Are you also responsible for the art direction/design of the magazine? After all, you are a communication designer by training.

I am. My career path is quite a full-circle story, actually. I went from paperboy (my first job in life) to editor of my high school newspaper, which is where my interest in graphic design became apparent. I studied art and design at university while interning for People Design in Grand Rapids, MI. Following graduation, I moved to San Francisco for an internship at IDEO and at 21 was hired as a communication designer and strategist, spending the ensuing three years traveling to conduct research in Brazil, India, Singapore, and Australia. I burned out at 24 and left IDEO to explore other opportunities. I applied for and spent two weeks at FABRICA, Benetton’s communication research center in Treviso, Italy. At this point, the concept for Hello Mr. was just coming to form, and it was apparent that my head was elsewhere. After receiving the rejection, I returned to SF to evaluate my options and decided to start over by getting rid of 80% of my possessions and moved to Australia where I spent the next year establishing the style guide and getting the magazine off the ground.

Where do you see Hello Mr. in the next couple of years? What’s the plan?

In many ways, I feel like we’ve just gotten started, so there’s so much I’d like to tackle. Taking cues from where it all started, I want to continue expanding our community, creating connections amongst it that empowers more individuals to achieve their goals. We have so many artists, writers, contributors, timely stories to draw from, that extend far beyond the print edition. It seems logical for Hello Mr. to host more events and experiences that bring the qualities of the publication to life in even more meaningful ways.

What do you say to people, who claim that print is dead or dying?

Oh, my favorite conversation! It’s no surprise to me that we’re obsessing over indie print magazines right now (or why so many are still starting up). We skeptically observe the risk takers through every major industry shift, waiting to see which underdog will spark a little jolt of innovation into the system. Many of the best emerging titles today are aiming smaller and reaching niche audiences who appreciate a less frequent piece of literature, produced without disposability in mind. The Internet is a noisy place, but Hello Mr. was created to be more contemplative in nature rather than compete for traffic. It’s only available twice a year and is designed to live on nightstands and coffee tables for as long as its content holds relevance to its reader, not to current topics, news, or trends.

Do you end up meeting fellow publishers and editors often? Any in particular that you admire for the kind of work they do?

As often as I can! There are a quite a few indie magazine makers near my office in Greenpoint, Brooklyn and we certainly lean on each other for advice and general moral support. The greatest influences in starting Hello Mr. were the creators behind newer titles like Underscore, Offscreen, Kinfolk, and Day Job. Now peers, we inspire and motivate each other in our independent projects. The collaboration behind the indie magazine movement often goes unnoticed, but we’re all in this together, all us little guys.

Any magazines you subscribe to currently? Surely you have a few favourites (indie/mainstream)?

I have an inconsistent diet when it comes to my printed media; Apartamento, Fantastic Man, Gentlewoman, BUTT, COLORS, 032c, and i-D will always be pillars in my collection.

We know that you visited India briefly for work in 2012? What did you enjoy most about your trip/what was your lasting impression, if any?

Before I left for the three week trek across India, I was warned that everything would be intense – the flavors, the colors, the smells, the energy, the hospitality. And they were right, in the best way! I can’t wait to come back.

Photo credits for images used in the blog: Clément Pascal for NeedSupply.com