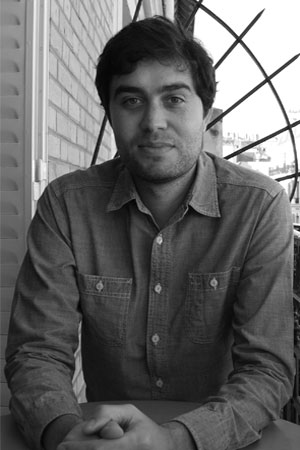 ‘The Happy Reader’ - this slim-sexy magazine has us swooning with excitement every time a new cover is released, alluding to the treasures within.

Seb Emina is the charming editor of this ingenious collaboration between Fantastic Man and Penguin UK. Seb is not new to the publishing industry and besides contributing to titles like Fantastic Man and The Gentlewoman, he has also authored a book ‘The Breakfast Bible’ which was the result of his hugely successful website, ‘The London Review of Breakfast’. We chatted with him (well, emailed him actually, hoping desperately that it passes as a interview-in-person; do tell us if it worked!) about his work in general and the idea behind the magazine.

NJT: I want to start at the beginning, though it sounds terribly clichéd, but to my mind, ‘the beginning’ is always a good place to start. We know you have been associated with Fantastic Man  before getting on board The Happy Reader, but I am curious to learn when and how did your journey in the magazine industry start?

SE: If there's a traditional route into magazines, I definitely didn't follow it. Before starting with The Happy Reader, I'd been a writer, an author and an editor but the only time I'd physically worked in a magazine office was a random and wholly irrelevant two-day stint as a sub-editor at Men's Health, maybe six years ago. My current involvement started after my book came out. I received an email from The Gentlewoman  asked me to write a piece about breakfast around the world. It led to more commissions from them and also Fantastic Man. Last year they asked if I'd be interested in becoming editor of their latest project, describing a magazine called The Happy Reader whose existence sounded like a beautiful and unlikely dream. I said: 'well, yes'.

NJT: The fact that you continue to be part of this industry is indicative of your love for print.

SE: I love print, but try not to say it out loud too much. I love it but think it shouldn't be fetishised, because it is still one of the world's most vital mediums – not, as some would have you think, a museum piece. If you remove convenience as a factor, I think most people prefer print to a computer screen.

NJT: You mention in your editor’s letter in the very first issue of The Happy Reader about the time you worked in the small office of a large hospital and found time to read during lunch breaks in a makeshift reading room. Story of every compulsive reader’s life, I guess, stealing time to read and getting lost in a different world.  So this work profile of editing The Happy Reader, must feel like a dream job?

SE: I worked in a lot of hospital offices in my early twenties, and a lot of other offices as well. I packed fruit salads for an airline, and washed dishes in a cafe. It’s a long time ago, but you’re right, years of jobs like those means I can appreciate how much of a dream it is to put together The Happy Reader. But you know, on some strange level I miss the intensity of reading when it wasn’t connected in some way to work, when it was escapism for its own sake. It was such a vivid experience. My mind was crying out for some contrast with the dullness of work. To be totally clear though, I’d never, ever want to go back!

NJT: Do you also get to travel a lot on the job? I know from the latest issue 3 of The Happy Reader, which has the Corsican travel classic ‘Granite Island’ as its chosen title, that you did take a trip to the island.

SE: Corsica doubled as a weekend break with my wife. I loved reading Granite Island while sitting on a train winding its way through the mountains. It made me want to send a photographer there to capture the atmosphere, which we did: Ola Rindal rode around on a motorbike, capturing loads of dreamy images. More recently I found myself in Naples and although it hadn't at all been spurred by the magazine, it just so happened that a city in the shadow of Vesuvius was the perfect place to think about the autumn issue, which has a certain volcanic theme.

NJT: Have you ever had a chance to travel to India?

SE: No, but I'd really love to. We have a beautiful photo from India in the front section of the autumn issue, from a library in Old Delhi.

NJT: Do you have a subscription to any magazine? Or do you pick up your copies from the stands/stores? Any that you picked up recently and enjoyed reading?

SE: From where I'm sitting on the sofa at home right now I can see a few magazines. There's The White Review, The Gentlewoman and the  London Review of Books. I'm subscribed to Cabinet, a glorious magazine filled with everything from in-depth essays on specific colours to short histories of clown crime. I try to look at as many kinds of magazines as possible – fashion, art, food, glossy, wordy.

NJT: Not only are you an enthusiastic reader but you have also authored a book ‘The Breakfast Bible’ the idea for which came from your website The London Review of Breakfasts. So would it be fair to assume, that you are also passionate about food?

SE: I like food very much, especially the splendid monotony of breakfast.

NJT: Apart from food and books, what are the other subjects you like to write about?

SE: For a while I kept getting work involving wandering around particular areas of London and writing impressionistic portraits of them. Those were great fun. But at the moment, much of my energy is focused on the magazine.

NJT: The style of capturing interviews and the concept of exploring the chosen classics for each issue of The Happy Reader, is very unique. And each issue ends with the tip on the book for the next season (issue) - a way to engage people with the magazine. Do you see that working? Do you get a lot of readers writing in to you, with their thoughts?

SE: We're getting more and more letters with each issue, which is solid evidence that people are really thinking about what they read in the magazine. Many are  reading every book we select, but the trick is to make a magazine that is fun to read whether or not you've read the book of the season. It can just be taken as a series of entertaining articles that all seem to be in the orbit of something just out of sight, like a planet whose existence you hypothesise based on the movement of other planets. It creates an atmosphere.

NJT: Its feather light and a perfect travel companion. In fact I gifted it to a friend who packed only this one print to read on her trip to Italy, because it’s just perfect to carry. Was that the idea behind the design/look and feel of the magazine? Love the covers too, by the way.

SE: Yes, exactly. You can hold it with one hand, like a book, so the other is free for an umbrella or a burrito. Also, we're trying to escape the magazine paradox whereby if you read the entire contents of a literary magazine it's hard to imagine where the time will come from to read any actual books.

NJT: I know the release of the next issue of The Happy Reader is not too far away, but are there any other exciting projects/things to look forward to for you in the coming months or later this year? Perhaps a big holiday or more writing/food adventure en route?

SE: I'm looking forward to going to Venice in November to wander around, eat fish and see a few pavilions at the Biennale.

NJT: For many writers, one-way to evoke that elusive state of being, in which inspiration is on tap, is music. Do you relate to that?

SE: I love going online and finding random music radio stations from around the world. You never have to think 'hmm what next?' and it kick-starts the imagination very nicely.

It would be a missed opportunity if we didn’t ask Seb to share his playlist with us – so we did. Here's a list of some of some his favourite global radio stations:

Beyond the Beat Generation, Netherlands

You can now buy issues 2 and 3 of The Happy Reader on our online store here. Issue 4 coming soon!