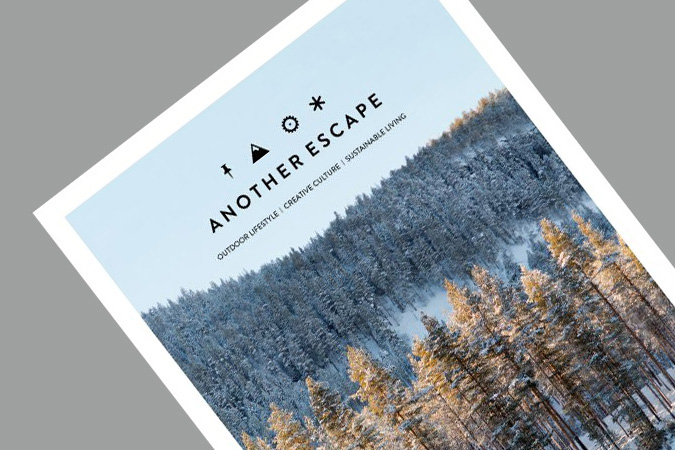 When outdoor lifestyle, creative culture and sustainable living is the strap line of a magazine, you know its looking pretty good already. Another Escape, a quarterly magazine from U.K. introduces itself on the cover of the magazine with purposeful icons representing its perspective upfront (see the image below) - Inspiration, Exploration, Process and Response. Being a big fan of the Noun Project and also using the icons bought from the Project’s website as much as possible in our communication here at Paper Planes - this visual representation instantly won solid brownie points from me.

Another Escape celebrates outdoor lifestyle, creative culture and sustainable living; one half of my New Year’s resolution list which I am sure is something many others relate to, as well. The winter issue of the magazine that arrived not too long ago and which I started reading earlier this week, proved to be a guiding star.

Each issue of the magazine covers four main feature sections around a single subject and each such subject is examined from a different perspective i.e. Inspiration, Exploration, Process and Response. The sixth issue is no different and the four main features are dedicated to the following subjects, Feature One - Peaks, Passes & Glaciers; Feature Two – Keeping Warm; Feature Three – Iceland; Feature Four – Beating the Blues. There is no way you can miss that this is a ‘winter’ issue. The editors’ letter explains that this is no coincidence and the idea was to encourage embracing of the natural rhythms that the change in season brings i.e. the slowing down and savouring the moments.

I was eager to discover stories of sustainable living so I skipped to them first-up. My keenness stems from a genuine curiosity and of course deep respect for people who embrace sustainable living despite the challenges and hardships the modern industrial world throws at them. Under ‘Keeping Warm’, Isobel Davies, an ethical entrepreneur, narrates her journey to setting up a new fashion brand Izzy Lane and how she came to own 500 rare breeds of sheep. ‘Pioneers in Agriculture’ is the story of Icelandic greenhouses, a story of how by collaborating with commercial greenhouses and local chefs, the Agriculture University of Iceland (AUI) is changing the food market in Iceland and providing an increasing range of fresh food to Icelanders. Cocoa, coffee, even bananas which are all traditionally tropical produces, can now be found in Iceland. AUI also uses biological controls for pests.

The magazine has its heart in the right place and you can tell. Not just stories of sustainable living but others too will make you want to wander out in to the open and embrace your surroundings. The format of the magazine is clean and avoids any kind of gimmickry in order to draw attention. I reckon the idea is to make the stories the real heroes. I am quite certain that this title will find its way into our surprise deliveries sooner than later – may be a mid year wake-up call to remind one of the resolutions each of us committed to at the beginning of this year.

Hope our readers have had an equally enlightening beginning to this New Year. Happy 2016!