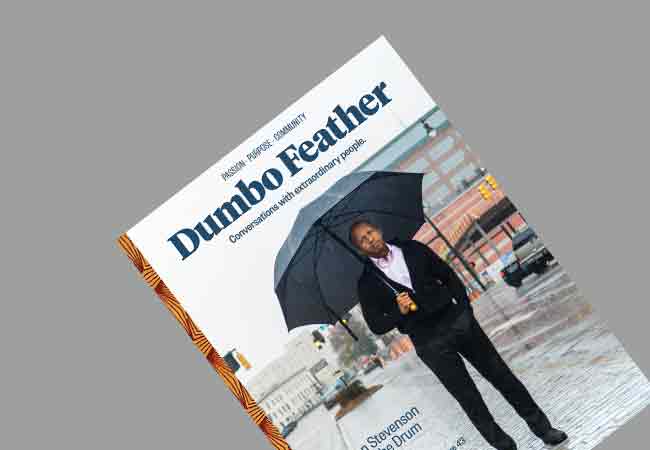 Let’s talk about the name first because all the clues lie therein. ‘Dumbo’ the elephant in a 1941 Disney film comes across a feather, which he believes, gives him the power to fly. In fact he always had the capacity to fly and the feather was just an excuse or at best a ‘prop’, the mind needed to take the leap of faith and glide. For Kate Bezar, the founder of the magazine – this was exactly the purpose of the magazine. Bezar was in search of the missing dose of inspiration in print which gave one the courage to do what one was truly capable of. This magazine is aimed to serve as Dumbo’s feather.

If you are amongst those who look for an occasional boost of inspiration, the kind that kicks you in the backside and reminds you to get up and act – then Dumbo Feather is here to deliver that kick.

This Aussie publication has been around for over a decade, scouring the world for people whose work deserves recognition and is likely to convince you to follow suit and chase your dreams, fearlessly. Each quarterly issue features five extended profiles of people worth knowing, across enterprise, education, science, sport, politics, fashion and the arts.

It was marvellous timing to find the latest issue (Issue 43) of this magazine – the much needed kick! Every interview in the magazine and every story resonated in one-way or the other with thoughts clouding the mind of late. One such interview was incidentally even relevant to the debate India found itself embroiled with recently. Bryan Stevenson spearheads the Equal Justice Initiative (based in U.S.A), which amongst other things has been representing people on the death-row. Stevenson recently released a book titled Just Mercy: A story of Justice and Redemption, debating the injustice in the justice system including racial bias, making a case for abolition of death penalty and choosing change and redemption over extinction. His is a commendable journey and a point of view that merits a discussion.

Also featured in the latest issue is an interview with Sali Hughes, a beauty columnist with the Guardian. Hughes’; column serves as a beauty bible for millions of women around the world. Running away from home at 15, Hughes’ road to her current success was one of resilience and hard work, as we understand from the interview. She too recently published her book Pretty Honest- a straight-talking beauty companion that echoes her love for all things related to the world of beauty and rejecting the cliché that deem beauty as a futile exercise pursued only by the feather-headed.

Every issue carries a hefty measure of inspiring stories, and another example is an interview, with filmmaker Maya Newbell featured in Issue 42 of the magazine. Newbell, a child of same-sex parents who with her documentary film ‘Gayby Baby’, captures and shares the stories of families like hers throwing light on the experience of growing up as a ‘gayby’.

More than 200 exceptional people with extraordinary ideas have been captured by the magazine so far in its 40 plus issues including author and entrepreneur Seth Godin, our favourite primatologist Jane Goodall as well Tyler Brûlé editor-in-chief of Monocle magazine.

Give it a read and LIMBER UP!