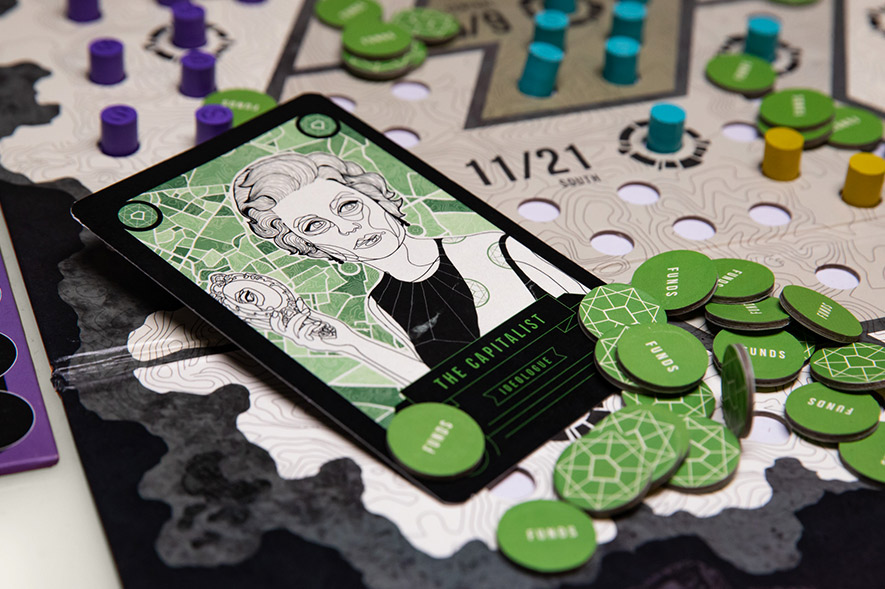 It can be hard to escape political parley — whether it’s at dinner parties or at the top of your social feeds. However, instead of dodging the dialogue, new politically charged board games are making conversations about governance more fun. Earlier this year, The Poll: The Great Indian Election Game, which simulates the electoral process in India, was launched for pre-orders, and soon, Shasn will take the conversation around politics beyond the duty to vote. Created by 29-year-old Zain Memon, co-founder of Memesys Culture Lab, Shasn is set to launch on Kickstarter soon.

Memon isn’t new to novel ways of storytelling — he’s a fundamental part of ElseVR, the lab’s virtual and augmented reality division. Memesys is also the studio behind films like Ship of Theseus (2012) and An Insignificant Man (2016). He says that the idea for Shasn was, in fact, sparked by An Insignificant Man, a documentary film on the rise of the Aam Aadmi Party. According to Memon — who quotes games over films as his preferred choice of media — it was important to continue a healthy political conversation even after the film through a politically charged, interactive and engaging experience. From ideation and design to final testing, the four-player competitive game, which simulates real-world democracy, has been in the making for over 15 months.

The immersive two-hour-long board game has a neat, colourful design aesthetic. The visuals are engaging, but they’re not meant to be distracting. Soumik Lahiri, who spearheaded the visual design for Shasn, explains that gameplay was the team’s priority. “Understanding the state of the game at first glance was what we wanted,” he says. Shasn requires every player to take on the mantle of a politician in the midst of a high-stakes election. By condensing the trials and tribulations of a real grassroots campaign, the game aims to deliver the experience of being a politician on the ground. It also deftly weaves in real-world concepts such as gerrymandering, coalitions and using conspiracies to your favour.

During the course of the game, players contest elections, build ideologies and influence voters as they fight to create majorities — the player with majority votes wins the game. At every turn, players must make deliberate moral and political decisions to earn resources and build their political characters. These decisions, in the Indian version of the game, are prodded by timely questions like “Should guns be freely sold at local convenience stores?” and “Should the GST be abolished?”. Every question — the game comes with 100 options — must be answered with “Yes” or “No” statements, with each answer yielding the player different sets of resources. Players will need various combinations of the four in-game resources — funds, media, clout, and trust — to win voters and strengthen their position.

Answering policy questions at every turn also builds ideologies and unlocks “Ideologue” powers. There are four different ideologues in the game — the capitalist, the showman, the supremo and the idealist. “The way the questions are answered will shape the kind of politician you’ll emerge as,” Memon says.

Design was crucial for the ideologue cards. While the board was, of course, created first, the four ideologue cards were next in line. Each has a distinct visual identity, which was developed in phases. “The more we played, the more we understood the nature and character of the ideologue,” Lahiri explains.

In addition to the Indian political landscape, Shasn also includes three other versions — the American, the Roman (historic) and the Future versions. The differences between them lies in the policy questions posed at each turn — the questions are specific to the political landscape at hand. Irrespective of which of the four versions you choose to play, the idea is to make you think like a politician, and question other players’ political choices and beliefs. It’s highly likely that over the course of two hours, players will engage in political dialogue that mirrors real-world democracy. Memon tells us that Shasn has been widely play-tested, and in addition to garnering highly positive feedback for its game design and visual identity, it has been extremely well-received in terms of gameplay as well. “We noticed that all players have been completely invested in the game, whether or not it’s their turn,” he says.

Memon hopes for the game to release next month — we’re looking forward! Perhaps it could help us all make more cognisant choices during the next election season.