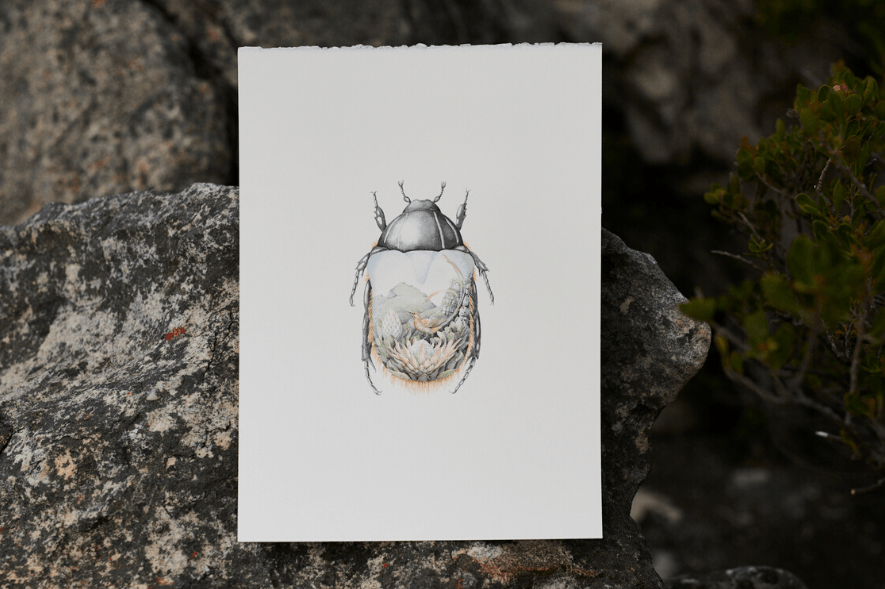 To get to his studio, artist Sujay Sanan walks through a national park. From his home, at the base of a mountain, it’s roughly a six-kilometre commute — time that he uses to clear his head. About a hundred metres away is the ocean where in the winter, he’s spotted many pods of whales and dolphins breaching the blue waters. Wildlife and the lush landscapes they inhabit are part of his everyday life, so it’s no wonder then that his careful observations of these ecosystems occupy centre stage in his art.

As a kid, Sanan was drawing — and drawing animals — before he could write. “I’ve always lived close to nature. Maybe that’s why natural elements have always left a strong impression on me,” he ponders over the phone from Cape Town, South Africa, where he now resides. He grew up in Himachal Pradesh, surrounded by the Himalayas, in Spiti, Kinnaur and Shimla. “I wanted to be a biologist and an artist for as long as I can remember,” he says. After graduating from the National Institute of Design (NID) with a degree in graphic design in 2008, he co-founded design studio Quick Brown Fox in New Delhi with fellow NID graduate Hanumant Khanna. But that was a while ago — since moving to Cape Town in 2013, he’s been focused on his fine arts practice.

Sanan’s paintings are easy to fall in love with. A Place I Know is his ongoing body of work. Started in 2017, he delicately melds environments with wildlife in evocative pastel hues, giving the viewer a sense of where a particular wild creature comes from. Each watercolour feels like a quick glimpse into another universe. There are otters and octopuses, butterflies and beetles, sunbirds and seals.

“When I started A Place I Know, I wanted to paint directly from where I was. I have so many experiences here that I inspire me,” Sanan says. These paintings offer a viewer the chance to get acquainted with many of Cape Town’s picturesque areas — like the towering Table Mountain via a caracal, waves crashing at Kogel Bay via a humpback whale, and a postcard-perfect lighthouse at the Kalk Bay Harbour via a Cape fur seal. In time, his travels elsewhere, like to Kenya’s Amboseli National Park and the Maasai Mara National Reserve, to Brazil’s Ilhabela State Park, and to India’s Jim Corbett National Park, have also found their way into A Place I Know.

In Corbett, Sanan spent time tracking tigers with experienced naturalists, but he missed spotting one in the flesh. Unlike many safari-goers though, he wasn’t hung up about it either. “The forest itself was so fascinating,” he explains. “According to a lot of people, I probably had the worst luck.” Still, he brought to life a majestic tiger crossing the Ramganga river.

Sanan’s eye for detail comes through strongly in his work, but even so, he isn’t able to gauge his own style. “I wish I could see my work outside my own head. I’m always quite fascinated by how people have such a strong way — almost like a visual accent — of telling their story. Perhaps just like we can’t hear our own accents, I can’t see my own style. I just have visions in my head, and I do my best to manifest them in the real world,” he says.

The first painting he made for A Place I Know was a Cape leopard from the mountainous Cederberg region, a couple of hours’ drive from Cape Town. “I had been following data from camera traps because the Cape leopards are very rare. They take up territories of about 600 sq km and often they’re only sighted through camera traps,” he recalls.

Rigorous research is a key component of the work Sanan does. Before A Place I Know, he worked on Imagine a Forest, a series of paintings reconstructing entire ecosystems. “That was completely based out of research papers,” he explains. “Often, it would be a few weeks of collecting a lot of data from different universities and scientists, [before creating] these paintings and drawings out of that data of relationships between animals — whether it was predator/prey, pollinator/seed-disperser, parasite/saprophyte, whatever it was.”

That large-scale research is what prompted the kind of finely tuned, exacting art that comprises A Place I Know. “I wanted to not be so vicarious and I started to paint from my own landscape,” he explains. Appropriately, his backyard happened to also be the Cape Floristic Region. “It’s the world’s smallest biome. It is probably one of the most special and threatened habitats on the planet, and it’s so cool to study. Even though life here is quite sparse and small, it’s botanically very rich. I now have a pretty good network of scientists and friends, so I can go into marine forests or I can be in a lab, helping with the dissection of an animal, or I could go to someone who has access to skulls and bones — it allows me to study various things.”

Before he sits down to paint, he has extensive drawings, made on large sheets of paper. “I can repetitively draw the same thing until I feel it’s perfectly refined and ready for painting,” he explains. “The way I work, I can’t change much once I start painting. So I have to be pretty sure of what I want to do in my drawing stage.”

How long does it take to make one painting for A Place I Know? “That’s a tough question. The painting I’m working on now, for instance, would take me five years and a day,” he says. “All prior experiences of painting go into doing the next one. Sometimes I’m trying to battle some specific technical skill — like understanding the relationship between different pigments and how they transition — and I could get stuck on that for days, without coming up with the final painting.” It could take several days and still not be good enough, or it could take a couple of hours to be done. “It’s done when it’s done. When it tells me it’s over, it’s over,” he says.

While most of his work for A Place I Know happened within a year, it’s now growing in spurts. What Sanan paints next depends on his encounters and feelings. “If I see an animal in a particular space, or if I see certain animal tracks and a certain landscape it belongs to on the same day — it’s often got to do with an ecological connection. But I think things morph and meld in my brain, and I don’t have too much control over that.” That said, these leaps of imagination are rooted in a comprehensive understanding of facts and science, he explains.

Sanan hopes for the series to grow beyond the landscapes he’s familiar with. “I was thinking of travelling to national parks around the world, and slowly building [A Place I Know]. It would be really cool to go to Antarctica and the Arctic Circle,” he says. In the meantime, prints of his art are available for purchase on his website. While it’s easy to place Sanan’s work in the space of wildlife conservation, his ideas for its purpose are far more open-ended. “I’m painting environments that vanish into animals, and whatever that says to you works. Whether you’ve had a similar encounter, you love the colours, you like the animal, or you just want to have it — after it’s done, it’s done.”