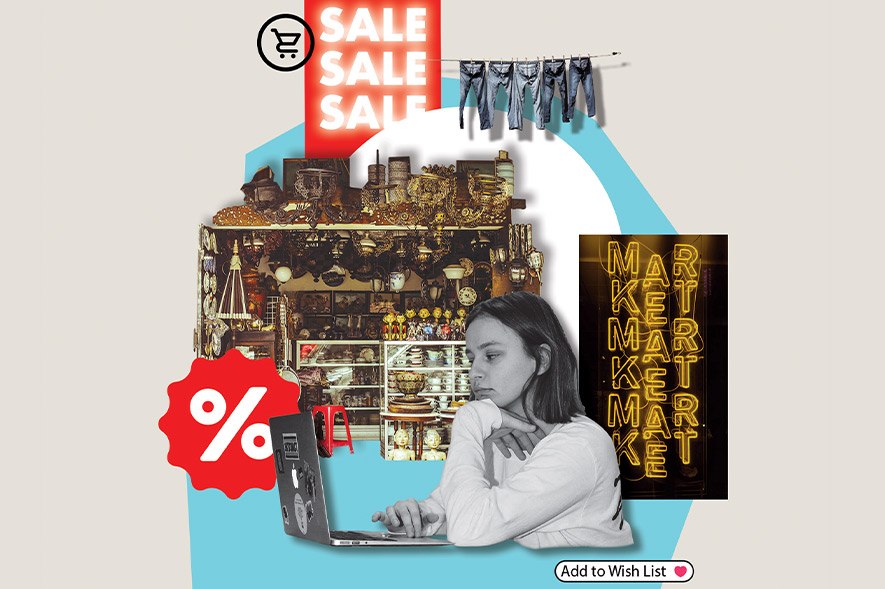 This story is part of Issue #1 of Big Little Things, a limited-edition magazine, produced and published by Paper Planes for UnLtd India, a launchpad for early-stage social entrepreneurs. Read more about this collaboration and UnLtd India here.

Our lives are filled with stuff — physical and virtual stuff. Sure, we use our Netflix subscriptions to have Marie Kondo help us declutter our lives, and scroll through Instagram accounts with minimalist aesthetics. We might even indulge in pared-down, Scandinavian-style modular kitchens to make our homes feel less busy. But at the end of the day, we can’t help but face facts — we’re obsessed with consuming.

Studies show that the idea of owning things comes to us early in life. “The idea that we can own something, possess it as if a part of ourselves, is one that children grasp by the age of two,” writes Christian Jarrett, a journalist, author and psychologist, in The British Psychological Society’s publication, The Psychologist. “And by six, they exhibit the ‘endowment effect’, placing extra value on an object simply by virtue of it being, or having been, theirs.” Essentially, we attach value to things right from a young age, and as we grow up, the things we own become linked to our self-esteem and identity. And so, the more we have, the better we feel.

Our want of things may have always been around, but things haven’t always been around. Through the course of modern history, there was a large chunk of time when access was only available to a privileged few. If you were, say, a peasant in 17th-century France, you would spend your life juggling between two or three work garments, and would only be using what you needed. Options were unnecessary. Perhaps, this is what makes Cinderella’s fairy godmother so essential in retrospect. It was only with the Industrial Revolution, which began in the late 18th century, that the idea of marketplaces, with shops, seeped in.

Later, technology came in, making the process of producing quicker and cheaper, and consequently making things more easily available to a larger number of people.

As time went on, these provisions and options fed our innate desire for things and the more we consumed, the more we wanted. Neuroscientist Jaak Panksepp, in his book Affective Neuroscience, argues that of seven core instincts in the human brain — anger, fear, panic-grief, maternal care, pleasure/lust, play, and seeking — seeking is the most important. He suggests that the act of seeking is more important to us than the act of getting the object. In 1978, a trio of researchers at Northwestern University and the University of Massachusetts studied the psychology of lottery winners. What they found was that winning the lottery didn’t cause long-term changes in happiness. This is partially because of what’s become known as the ‘hedonic treadmill’ — the tendency of getting used to something that made us happy, which makes us seek newer, shinier pastures. As they go on to elaborate in their paper, “eventually, the thrill of winning the lottery will itself wear off.” You may get your dream job, you may buy that coveted dress you’ve been eyeing for months, but once you get it, you’ll be wanting more. It’s not all your fault, but it may be your brain’s.

As Panksepp explains, all mammals have a seeking system, where dopamine (the neurotransmitter that controls the brain’s reward center) is involved in planning activities too, in addition to other cognitive functions. This means animals feel rewarded for exploring their surroundings and seeking new information for survival. Our instinct to seek, which at one point might’ve meant foraging for berries, now makes us always want more — shoes, books, phones, TV shows, texts, validation, everything.

We’ve always managed to mould our surroundings to fit our needs — building fires when we were cold, sharpening rocks for tools. So it’s no surprise that we created markets to respond to our need for consumption. Over the years, shops turned into brands, brands went global, and simultaneously, we moved from retail stores and spaces, to using computers and the internet to shop (Is eBay outdated yet?), to getting everything with our smartphones.

Dhruv Saxena, co-founder and chief product designer of strategic product consultancy firm Obvious, sheds some light on this relationship between the industry and the consumer. “What worked in 2012 does not necessarily work in 2020,” he says. Obvious has worked on some of the country’s most successful apps including Myntra, Swiggy, and Dunzo. According to Saxena, users’ needs are changing constantly. When working on the design for a product, Saxena and his team study consumers closely to observe their interactions with the product prototype and then make tweaks accordingly. The landscape continues to shift, technology continues to shift, and people’s intuitive interactions with technology also continue to shift, he explains. For example, Instagram’s stories or Snapchat’s design aren’t exactly user-friendly, but consumers seem to navigate through them seamlessly.

But what kind of consumers are we? Are we passive consumers, simply being told what we should be getting, or are we actively specifying what we want? According to Saxena, it’s neither. Quoting Steve Jobs as an example, he suggests that instead of asking us consumers (or assuming) what we want directly, the industry understands our needs better by introducing an idea or a product to a group and then gauging reactions. Accordingly, one can keep what works, eliminate what doesn’t, and basically design to fit the exact needs of the consumer. This, in turn, makes us consume more.

What you could take away from this is that it is impossible for us to ever be satisfied. When will this peak and when will this blow over? Apparently, we’re nowhere close. Saxena says that as incomes rise in countries like India, the standard of living grow — we are only just getting started. In fact, our patterns are vastly different from the West. Varun Duggirala, co-founder and content chief of creative agency The Glitch, explains that consumption patterns are defined by social, economic and cultural context. In contrast to the western consumer who went through the whole shop-to-phone process, “a lot of people in India have just started off with the mobile to get internet, and consume almost naturally like mobile citizens,” he says. “That typically changes the way we buy.” Now we have more options, we have more accessibility, and we look for more value.

For a brand to work in this landscape, according to Duggirala, it needs to have a strong identity, stand for something, and it must engage. To be appealing, it needs to be clear with its marketing. We need to be engaged, courted, and humoured. There’s a lot of thought that goes into creating a brand identity — with each of their products also often telling a story — to sell it to us. With the help of ever-evolving technology, brands can be almost nurturing in their efforts to make sure we are as happy as we can be. The future, Duggirala says, will have brands investing more and more into creating content for the consumer, trying to tell the right kind of story.

It’s clear that we want things, and it’s clear that marketers are more than willing to cater to our demands. The question then is, how we decide what we want. In a world where choices abound, how do we pick one thing over another? Neuromarketing, a fairly new discipline that looks at neuroscientific research to determine consumer behaviour, might have an answer. According to neuroscientist Paul MacLean’s Triune Brain Theory, our brain is divided into three parts — the reptilian brain, the limbic brain, and the neocortex. The reptilian brain and the limbic brain are responsible for primal behaviour and emotions respectively. They have no capacity for language. The neocortex is the rationaliser and performs high-order brain functions like cognition, language, sensory perception, consciousness and more. According to neuromarketers, when we buy something or choose something, we make a decision with our reptilian and limbic brains, which suggests that our consumption is instinctual. We buy or consume what strikes a chord with us.

We’ve come a long way from Cinderella. One might fear that our hunger is an omnipresent beast — growing with time, shifting things in its favour to satiate itself, and perhaps eventually consuming itself, leading to the annihilation of our species. And it’s a valid fear. But in this highly manufactured world of ours, choice remains king — which also means we can choose less, choose to slow down, or choose nothing at all.