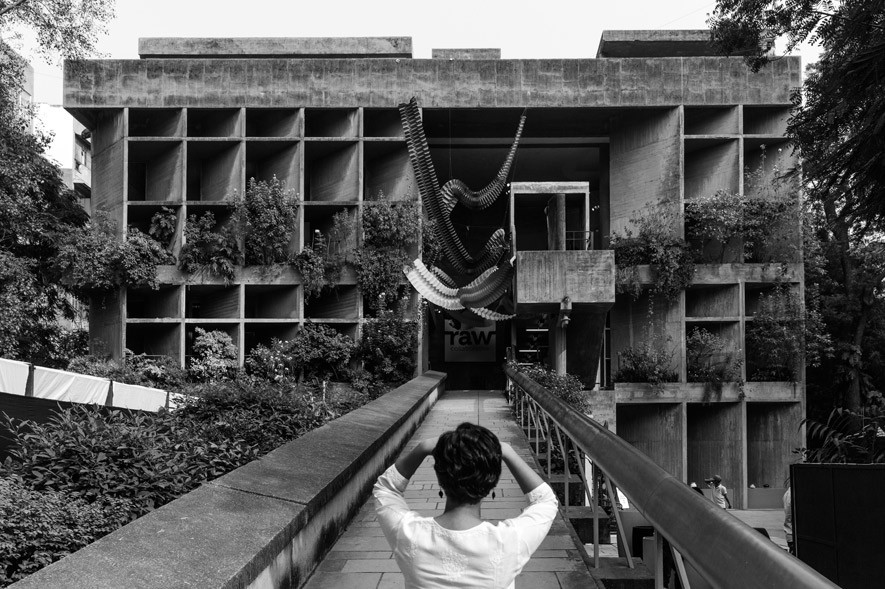 The Mill Owners’ Association Building is a stolid structure on the banks of the Sabarmati River in Ahmedabad. Shadows fall at sharp angles, foliage grows out of the facade, and raw concrete keeps it standing. Designed by Le Corbusier, the iconic Swiss-French Modernist who went by Charles-Édouard Jeanneret before he took on his moniker, the building dates back to 1954. Corbusier is perhaps better known in India for his work in Chandigarh, a city he was commissioned to plan by Pandit Jawaharlal Nehru, which would be “symbolic of the freedom of India, unfettered by the traditions of the past”. Ahmedabad is one of four cities in the world that’s home to more than three of Corbusier’s buildings (the others being Chandigarh, Paris and La Choux-de-Fonds). Well regarded as one of the 20th century’s most influential designers and urban planners, Corbusier’s ideas were radical, especially for the time, and even today, his constructions tend to leave visitors with a stark sense of insignificance.

Corbusier visited Ahmedabad briefly in 1951 — during his first stay in India — when he was commissioned by the city’s business elite to design four buildings: two private residences (Villa Shodhan and Villa Sarabhai), a cultural centre (Sanskar Kendra), and the Mill Owners’ Association Building. This is work that in the future would draw big names like Louis Kahn to the city too, to construct the also-iconic IIM-A building.

To fully understand what brought Corbusier to Ahmedabad, we need to take a few steps back in time. Ahmedabad’s first textile mill was established in 1861 by Ranchhodlal Chhotalal, after which the city’s textile industry grew exponentially. Propelled by Gandhi’s Swadeshi movement, the city’s economy — largely driven by trade and industry — became self-reliant in the 20th century. The city’s businessmen also patronised the arts and endeavored to turn Ahmedabad into a vibrant cultural hub. During the time of Corbusier’s visit, four names stand out — Kasturbhai Lalbhai, said to be Ahmedabad’s wealthiest mill owner; Chinubhai Chamanbhai, the city’s mayor at the time and Lalbhai’s nephew; Surottam Hutheesing, the president of the Mill Owners’ Association, another nephew of Lalbhai, and the one who commissioned Corbusier to build the Association’s headquarters; and Gautam Sarabhai, of the prestigious Sarabhai family who also owned the Calico Mills in the city. These mill owners of Ahmedabad, most of them Jain families, were close — and their personal relationships only strengthened their business.

In fact, Corbusier kept in mind their cohesive, collaborative nature while designing the Mill Owners’ Association Building. It was to be a place for people whose private and public lives were intertwined, and which would have to be fit for various gatherings and events. Corbusier had previously put down his ideas of bridging the gap between public and private in his book Une Maison – Un Palais (1928), two years after his Villa Cook was erected in Paris.

Many similarities have been observed between the designs of Villa Cook and the Mill Owners’ Association Building. With the latter however, Corbusier also had to make adjustments for the city’s tropical climate. For this, he brought to the fore his own hot-weather experiments in Tunisia, Algeria and Argentina, along with inspirations from Indian vernacular architecture.

The front-facing facade, which features the ramp to the first floor, faces west and creates an imposing setting with its diagonal brises-soleil — the grid of windows (of sorts) that’s meant to keep out the sun — and the plants sprouting out of it. This architectural device also obstructs views from the street, while letting air and indirect sunlight in. For the east wall, overlooking the Sabarmati, Corbusier chose to open up the building by placing slender brises-soleil, perpendicular to the structure, so that the light streams in along with breeze from the river.

Construction took about four years, but the process wasn’t all smooth sailing. There were reportedly several disputes between the mill owners and Corbusier, and BV Doshi, then a young architect who had just returned from working at Corbusier’s atelier and who was overseeing the construction of the Mill Owners’ Association Building, came to the rescue. Towards the end, when the arguments reached a deadlock, most of the building’s furniture was designed under Doshi’s supervision.

Today, the Mill Owners’ Association continues to keep Corbusier’s iconic monument in shape, and rents it out for public activities and events — like Raw Collaborative. For four days this year, Raw Collaborative, currently in its third edition, turns the structure into a design extravaganza. While visitors otherwise require permission to access the building, events like Raw Collaborative allow for a celebration of Indian design — both through the architecture and through the contemporary designs on display.

Raw Collaborative 3 is currently underway at the Mill Owners’ Association Building in Ahmedabad, until December 1, 2019. To attend, register now (₹350 for one day, and ₹850 for all four days).