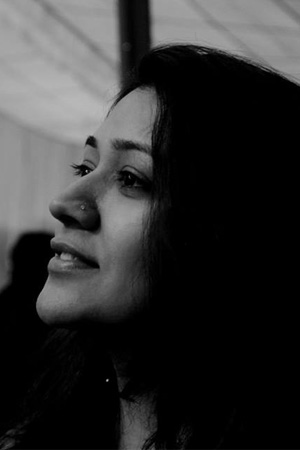 While I was trying hard to tame my anxious energy about interviewing a journalist – and a brilliant one at that – Ravina Rawal, the editor of the newly revamped Motherland magazine, arrives to meet me at Perch Wine & Coffee Bar in Delhi’s Khan Market. Deflating my ball of nervousness at once, she fills the room with euphoria, inspiration and lovely anecdotes.

Of course, the storytelling has come along with her from her childhood. She was a voracious reader while growing up in a family filled with readers and storytellers. She was born in Delhi and was sent to Rishi Valley, a boarding school in Andhra Pradesh, during her early years. “I did lot of letter writing while I was at the boarding school. My grandfather and mother would send me so many stories, and I would write back to them.” She would also lap up anything her mother gave her to read, and would devour Winnie the Pooh books and anything by Enid Blyton. “I would look at inanimate objects and start wondering why they weren’t sprouting things. I would look at a tree and genuinely believe it to possess magical powers. So yes, those books really expanded my imagination,” she recalls animatedly.

She finished her last few years of schooling at The Shri Ram School in Delhi, and then pursued Philosophy Honours at Lady Shri Ram (LSR) College, Delhi University. Then with the clear ambition of being an “award-winning copywriter”, she headed to Mumbai for the advertising & marketing post graduate course at Xavier Institute of Communication (XIC). Ravina’s advertising stint lasted only for a year though.

She worked at Capital Advertising (now Publicis Capital) where she became adept at creating TV spots and radio commercials in no time, but wasn’t able to crack print ads, she says. “For me, you can only be a great advertising person when you can nail print, and I couldn’t. While writing comes easy to me, I am not good at doing that punchline stuff. And even till today, headlines are my kryptonite.”

She found her way out of advertising and landed straight into journalism with a job at Outlook magazine where she worked under the aegis of the late Vinod Mehta. She then joined India Today’s travel magazine Travel Plus where she worked for over two years. When she realised that being on a travel magazine’s desk means staying at the desk more than actually travelling, she moved on to do freelance travel writing for about four years.

After this, came one of the biggest breakthroughs of her career with MTV Noise Factory, a magazine from the house of MTV. Ravina’s face lights up more than usual when she talks about Noise Factory. “I just stormed into MTV’s office one day and said ‘you need a magazine, so make it happen’. They were obviously toying with this idea for quite a while, and I just had to convince them that I could do it.”

Noise Factory was a brand extension and a way to go back to the urban audience that MTV managed to alienate a bit when it tried to localize itself with shows like MTV Roadies, Splitsvilla, etc. Noise Factory was a youth culture magazine, with an aim to bring the underground to the mainstream. “At that time, a lot of stuff was actually underground, as opposed to today where even the underground is so commercialized. So we had a mix of music, books, cool things to buy and offbeat jobs, among other things. We also had a section where we featured young people who were doing socially relevant, meaningful things.”

The biggest highlight of the job was the massive playground that Ravina was given to play in. “Aditya Swamy was the MTV head at that time. He gave me a lot of flexibility and always motivated me to experiment as much as I could. A lot of it fell flat on its face, but we would just pick up the pieces and move on. I learnt a lot on the job,” she says. Of course, there were many challenges too. Since there was no team in place, Ravina had to play multiple roles herself. “Also, there was no reference to context as we were creating something out of scratch. We had to make our own rules as we went along. Those were both the challenges and the thrills for me,” she adds. The magazine, which she worked on as the editor for about three years, subsequently shut down in 2013.

After a short break, and toying with the ideas of writing a book and a movie script, she became the features editor at The Sunday Guardian newspaper. Talking about the experience at the newspaper, she says, “I had a well oiled team of about eight people whom I had hired myself. We worked in a very flexible way, and there was a good, inspiring atmosphere. Everybody was really enthusiastic and honest.”

She had spent about two years at The Sunday Guardian when she heard that Motherland was looking for a new editor to revamp and reenergize the magazine. She was immediately transported back to her Noise Factory days. The temptation of starting something new and pushing it forward was something she was happy to succumb to.

“Motherland has always had some pretty strong content. It explores themes that other magazines don’t, and it does that in a really interesting way. I just felt there was a scope to do it differently with some new ideas and additions, which is what we are in the process of doing now,” she says. Another reason why she decided to be a part of this venture was her meetings with the magazine’s founders V Sunil and Mohit Dhar Jayal - who started the magazine when they were a part of Wieden+ Kennedy and now produce it independently. “I was just fascinated by them. They are so sharp and brilliant in what they do. So Motherland was also a chance for me to work and grow along with them.”

Motherland, which focuses on contemporary and emerging Indian cultures, is a one of its kind magazine being published in India right now. It has garnered much critical acclaim over the years for both its content and aesthetics. Did the almost cult following of the magazine ever intimidate Ravina while taking this up. “It didn’t intimidate me to start it from scratch. It does have a legacy of sorts but I am messing with that legacy, and not really trying to carry it forward. Aesthetically, the magazine remains the same because Sunil (creative director) is still doing it. Content wise, I have changed a lot. And may be, the Motherland loyalists might not take to it immediately, but the idea is to reach out to an audience beyond them as well. World domination,” she laughs.

Working on her very first issue of Motherland - which is all about looking into the future - has been a fun fuelled ride for her where among many other tasks, she sent out a mail to the American president Barack Obama. Motherland had many conversations with 10-22 year olds for this particular issue in different formats including a thinktank at Google. The idea behind this, as Ravina says, was to actually talk to the future. “The younger generation is highly self aware, and sometimes cynical. They have such complex structure of thoughts. We spoke to kids from all over the country to understand the problems they would like to solve. We also featured kids who are already doing innovations in their downtime.”

For this issue, Ravina also had an interesting Skype conversation with the Dutch neuroscientist and neuroengineer Randal A. Koene who says that he will be able to upload a human brain onto a computer, and with American physicist Ronald Mallett who is about to unveil a time machine. She also spoke to Team Indus, the only Indian team in a global race to the Moon (Google Lunar XPRIZE). “I decided to do these interviews myself because since I am not an expert on these subjects, I knew that I would be able to present it to the world in an easy-to-understand way. Everyone should know about all the exciting things happening around us right now.” Ravina’s effortless wit, curiosity and easy conversational tone are hard to miss in the entire new issue.

Working with an art director of Sunil’s caliber has also been an interesting experience for her. While she likes to get involved in all aspects of magazine making, in this case she was very sure of leaving the aesthetics to him. “Look at the body of his work! He obviously knows what’s best when it comes to design. When he takes over, he manages to add new layers to the stories. Most magazines in India don’t realise the immense potential of having a thinking art director.”

Moving forward, she feels that Motherland will evolve gradually, and we will see what exactly it can become and what it would stand for by the end of this year. However, one thing she is blatantly clear about is to be anything but mediocre. “Mediocrity is so rampant in all the creative industries here. You can’t tell one magazine from another, especially in the lifestyle space. But I am in a place where mediocrity simply cannot pass through. Another thing I am sure about is having authentic stories. Therefore my brief to my team is ‘if you can Google it, then I don’t want it’. This basically means that writers have to really be on the field to find stories that readers won’t find anywhere else.”

This is something that she believes applies to any magazine that actually wants to stand out today. “You need to be the authority on a subject that you choose. Reading has become such a rare habit today and the Internet has an abundance of content, so you really need to give people a very compelling reason to buy your magazine,” she says.

Finally, now that the new Motherland is out for the world to see, does she feel satisfied with what she has created? She says, “I don’t know how people are going to react to this but creatively I am so excited right now. We have a start-up atmosphere so there is a new learning every day. For me, this is like a grown up version of what I felt like at Noise Factory. However stressful my day has been, I go to bed happy, waiting for the next morning. And that is just so rare.”

The latest issue as well as back issues of Motherland Magazine are available for purchase In Store - shop here.