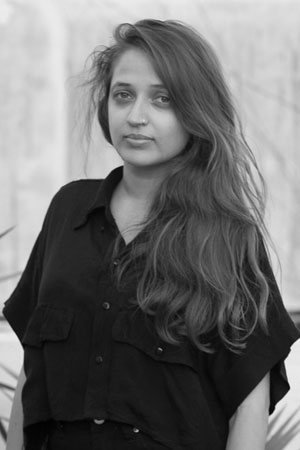 In between her eponymous blog and the launch of one of the coolest online magazines in India, Sheena Dabholkar has quite literally been there, done that. She is a writer, photographer, creative director, stylist, and a global traveler.

thisissheena.com is a widely acclaimed blog that was started by Sheena to combine her work portfolio and her love of all things interesting related to travel, design and lifestyle. Earlier this year, she announced the launch of her indie online magazine titled LOVER which comes as a fresh breath of air in the usually tripe creative lifestyle content space in India. It has a great variety and many interesting voices. And apart from good content, Sheena is also focusing on the layouts - something often ignored in the online magazine space. LOVER also doubles up as a boutique studio for creating visual and editorial content for brands that are a good fit.

Sheena is also on our Magazine Folk radar because as an independent writer, she has contributed to various magazines which range from Elle to Vogue to Lonely Planet India, apart from other platforms.

When she is not busy creating fabulous content for these platforms, researching, or travelling the world, Sheena likes to indulge in a variety of delicious personal projects like ‘#changeyoucaneat’ (my personal favorite) and ‘Grandmother’. There are at least a dozen of them, she tells us.

Yes, we are as curious about her as you are, so we decided to have a conversation with her about personal projects, LOVER, collaborations, travel, magazines and much more. Read on:

Tell us a bit about your childhood, and your growing up years in New Zealand and later Australia.

It was like one of those storybook childhoods. Kind of tragic and painful but also kind of whimsical. I grew up with my grandparents mostly, and I was an only child so I read and wrote a lot. I played a lot of pretend. I documented everything even back then. I collected weird things. My other grandparents owned a letterpress printer and I used to get unlimited number of notebooks made from leftover pages of my old school books.

While other kids wanted to be pilots and ballerinas, I wanted to be a botanist, so I had these books filled with leaves. I was kind of always environmentally aware and a bit politically charged from when I was a baby, which I suppose hasn’t changed much.

I moved to Auckland, New Zealand as an adolescent and had a really hard time, though I did like its parks and libraries. I originally went to Melbourne, Australia on an exchange program, but loved it so much that I eventually moved there.

When and why did you decide to move back to India?

When I graduated in 2008, the recession had hit Australia hard enough for there to be no jobs on employment sites and as a fresh graduate I was at the bottom of the barrel. In July 2009, I decided to cut my losses and come back and hang out with my grandparents. I haven’t left since (well, I have but I kept coming back).

What were some of the initial projects you took when you moved back?

I did mostly photography projects and I travelled with an MTV show across South India and Africa creating visual and editorial content for their microsite. It was the most toxic environment ever and one of the worst experiences of my life. But at the same time I got to be on safari for two weeks and hang out at the pyramids, so it was also kind of amazing.

You do a lot of fun and interesting personal projects like ‘Grandmother’ and ‘#changeyoucaneat’. Can you tell us a bit about them?

I literally have dozens of personal projects. I like archiving things. Those two are on my site because they’re largely crowdsourced. The ‘Grandmother’ one is an ode to my grandma really, and it’s had an amazing response. People love sharing stories about their grandmothers.

I did ‘Change you can eat’ because I was documenting this bizarre (normalized) phenomenon for about five years. I remember going through a government toll and getting some rubbish candy for change. My friends and I had been discussing non-monetary currencies for a while so I channeled my annoyance into a strange fascination.

Both these projects a bit neglected right now.

No, and honestly it feels like a different lifetime. I launched Incredibooth because I did it for friends once on a whim and the response was overwhelming. I’d returned from Japan where they love them and nobody was doing photo booths at the time so I decided to turn it into a business. (Now everybody is doing them.)

When did thisissheena really start? You have been an avid blogger for a long time, so what led you to create this particular space?

I launched thisissheena in 2011 because I needed to have an online portfolio for my work. I had already been blogging for several years. So I launched it to combine the two.

What has been your biggest learning from thisissheena?

That I love the blogging part but I hate all the associated garbage like hashtagging and blogmeets.

Let’s talk about LOVER now. Since you already had a really popular and acclaimed space like thisissheena, what prompted you to start a new platform?

I kind of outgrew thisissheena a little bit. I wanted to blog more about other people and I wanted other people to contribute too but the site was called ‘my name’. Now thisissheena will be more of an archive of my own projects and writing, personal travels, things I like and miscellaneous stuff that doesn’t quite fit in LOVER.

I knew I wanted to create a magazine a few years ago but the idea only fully took shape late last year. I had been thinking about the LOVER content studio for a while, and I thought well it’s gotta have a great online magazine so I can showcase some of the work I’d like to create, but then it kind of grew into something larger and I let it.

What’s been the response to the first issue?

The response has been amazing. The first issue crossed over 10,000 readers in a very short time and we have no viral content which is quite encouraging. It’s also very affirming to see people subscribing, especially people I don’t personally know.

You mentioned a very interesting point in one of your social media posts about how we end up neglecting the art direction part for a digital publication. Tell us more about this.

Online publications generally tend to use and follow a basic blog template which is fine but that means art direction takes a backseat. With LOVER, I can play with the layouts and artwork in a way that’s interesting.

What’s your vision for LOVER?

You have a strong stance on (environmental) sustainability. How much of LOVER’s content would be sort of devoted to this?

LOVER's content is not devoted to sustainability but rather sustainability is the underlying thread. For me, sustainability isn't an option; it's intrinsic to life. In reality, I feel like it should make the front page news every day. Droughts and natural calamities are a larger scale effect of a lack of environmental empathy, and this should be as important as any politics. It affects our human condition - everything from the air we breathe to our water safety to the food we eat.

The sustainable lifestyle content is simply what I think is missing from mainstream media. Do we really need more profiles on handbag collectors? Nah. Outside the magazine, we have some initiatives planned to help people and establishments make small changes that can have huge environmental impacts.

In your collaboration with brands, what are the key things you look for?

Whether I’m a good fit and I’ll have fun with it. LOVER doubles up as a visual and editorial content studio, and I mostly collaborate with brands to produce content for their own channels, but it has to be a good fit.

Will we see a print version of LOVER in the future?

Yes! Well sort of. I’d love to launch a yearbook with a year’s worth of highlights and my favourite stories from the site.

You contribute to a lot of different publications around the world. How is the experience of working with multiple publications?

I don’t freelance very much actually. I tend to work with the same publication over and over (currently Lonely Planet Magazine India). I rarely write from the desk. Sometimes an interesting opportunity presents itself but I don’t pitch these days.

My body of published work is varied only because I’ve been published since I was 16. I have my bylines in lots of great places but I prefer to create work for myself.

I don’t take enough time out with print magazines as much as I love them, and I love the idea of disconnecting to really gorge on them. I’ll pick up interesting titles when I travel or I get them as gifts sometimes (Dirty Furniture and [wherever] are my most recent acquisitions). Brownbook is my favourite print magazine. It’s nice to read about non-white places and people after a lifetime of those narratives/perspectives.

I do read a lot online though, and now I can in the name of research.

You are a writer and a photographer. How much does that help in shaping your overall projects? Also, how do you really create balance between the two in your personal projects?

I’m happiest when I can find a balance though I tend to do more writing for publishers, more photography for brands and personal clients. My personal projects are usually a healthy mix of both. My commercial to personal work ratio is currently about 1:4.

How does travel influence your creative life?

Leaving all the time lets me have a fresh perspective of things here I think. At the same time, a lot of my work is largely India-centric because that’s where I see a gap in interesting storytelling. I travel because I love it and a life of travel feels very natural for me. I mostly do it for myself.